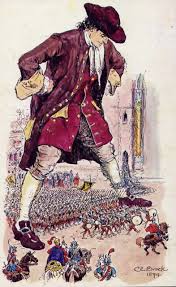 19 October 1745: Jonathan Swift died in Dublin on this day. He was 77 years old. He was a brilliant satirist, an essayist, a political pamphleteer (first for Whigs then for the Tories), and a poet. He became a Cleric who became Dean of St. Patrick's Cathedral, Dublin. He is remembered for works such as Gulliver's Travels, A Modest Proposal, A Journal to Stella, Drapier's Letters, The Battle of the Books, An Argument Against Abolishing Christianity, and A Tale of a Tub.

He held a Doctor of Divinity degree from the Established Church  and in later  years was appointed Dean Of St Patrick's Cathedral in Dublin. He was though never really happy in that role and devoted most of his time and energy to literary and political activities. He was a constant thorn in the side of the Dublin Administration and an advocate of Ireland controlling her own destiny - though within the Protestant framework.

He is still one of the best known literary figures of the 18th Century throughout the English speaking World. His novel Gulliver's Travels is one of the most widely known works of fiction in the English language.

His least years were sad ones as his friends died off and his intellectual capacity deserted him.

Definite symptoms of madness appeared in 1738. In 1741 guardians were appointed to take care of his affairs and watch lest in his outbursts of violence he should do himself harm. In 1742 he suffered great pain from the inflammation of his left eye, which swelled to the size of an egg; five attendants had to restrain him from tearing out his eye. He went a whole year without uttering a word.

After being laid out in public view for the people of Dublin to pay their last respects, he was buried in his own cathedral by Esther Johnson's [Stella] side, in accordance with his wishes. The bulk of his fortune (twelve thousand pounds) was left to found a hospital for the mentally ill, originally known as St Patrick’s Hospital for Imbeciles, which opened in 1757, and which still exists as a psychiatric hospital.
Posted by Columba Iona at 03:50