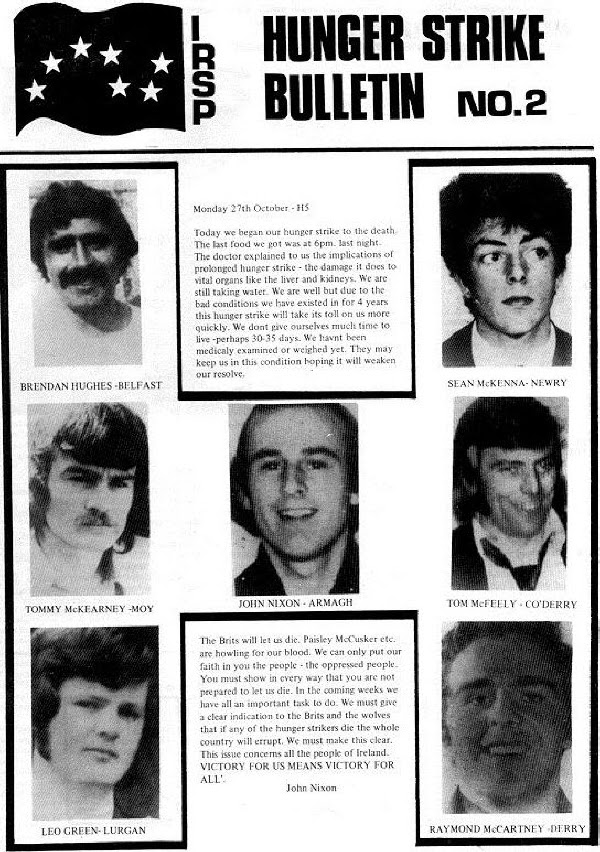 27 October 1980 - Beginning of the Hunger Strike by seven Republican prisoners in the 'H' Blocks at Long Kesh on this day. The prisoners who volunteered to go on the strike were Tom McFeeley, Brendan Hughes (until then, the OC for protesting prisoners), Raymond McCartney, Leo Green, John Nixon, Tommy McKearney and Sean McKenna.

The determination to launch this form of protest grew out of the campaign to secure a political status for republicans who had been captured by the British during the Conflict since 1976. It was in that year that the British Labour Government withdrew its further implementation for any one convicted after that. This then led to the ‘Dirty Protest’ but despite enduring terrible conditions it was obvious the then British Prime Minister Margaret Thatcher was not for turning on this issue. The events that led out of this Hunger Strike and the one the following year were a turning point on modern Irish History. Part of the statement issued by the prisoners about to embark on Hunger strike read as follows:

We, the Republican Prisoners of War in the H-Blocks, Long Kesh, demand, as of right, political recognition and that we be accorded the status of political prisoners. We claim this right as captured combatants in the continuing struggle for national liberation and self-determination.
The campaign outside then got underway and was fought on the granting of Five Demands that the prisoners thought could lead to an honourable outcome:
1. The Right not to wear a prison uniform;
2. The Right not to do prison work;
3. The Right of free association with other prisoners;
4. The Right to organise their own educational and recreational facilities;
5. The Right to one visit, one letter and one parcel per week.
Posted by Columba Iona at 02:28