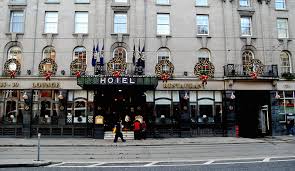 2 April 1914: The Foundation of Cumann na Ban on this day.  It was formed to organise the Women of Ireland to help in the fight for Ireland’s Freedom. Its first ‘official’ meeting was in Wynn’s Hotel, Dublin [above]. Agnes O’Farrelly was its first president and Mary Colum was one of its first organisers. The initial provisional committee consisted of O’Farrelly, Agnes MacNeill, Nancy O’Rahilly, Mary Colum, Jennie Wyse-Power, Louise Gavan-Duffy, Maire Tuohy and Maureen MacDonagh O’Mahoney. Its primary appeal was to women who could give time to the establishment of the organisation, women who did not need to work, but soon most were women who worked for a living—influenced by suffrage and labour issues.

Although it had its own command structures, the Cumann as a whole was subordinate to the Volunteers. Most early members were wives, girlfriends or sisters of male nationalists whose interest in the success of the Rising was due to their family ties to it. The women of Cumann na mBan used their unique position to increase the visibility of Irish women in the struggle for independence.


In 1916 there were three branches in Dublin: central, with headquarters at 25 Parnell Square; Inghinidhe na nÉireann, based at 6 Harcourt Street; and Columcill in Blackhall Place. In contrast with other organisations, the Cumann na mBan preserved its position after the Rising and it is probably because of its existence that the struggle for independence continued. The commitment of women before, during and after the Rising helped to bring the Irish nation to support the separatist movement. The widows of those executed in Kilmainham Gaol after the Rising did more to draw attention to the independence movement than any other group. The widows and female relatives of the executed and captives filled the voids in leadership and ensured that Irish independence did not die with their loved ones.