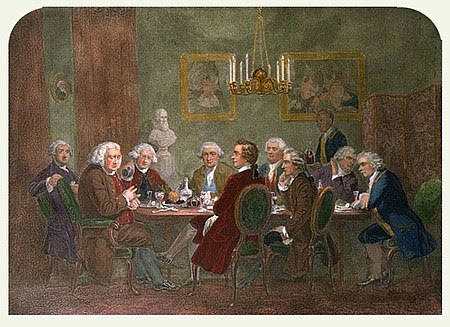 April 4 1774: Oliver Goldsmith, Irish novelist, playwright and poet, died in London on this day. He was born in the Irish Midlands in about 1730 the son of an Anglican clergyman. At the age of eight he had a severe attack of smallpox which disfigured him for life. He studied Theology and Law at Trinity College in Dublin during the 1740s and eventually graduated from there as a Bachelor of Arts in 1749. While a student he picked up a taste for the good life of drinking, singing and playing cards. He spent some time studying Medicine in Edinburgh and in Leiden in the Austrian Netherlands but gave it up. He then drifted about and wandered on foot across Flanders, France, Switzerland and Northern Italy. He survived on his wits and ‘busked’ for a living when he could.

He settled in London in 1756 and started to earn an income by the pen. Necessity being the mother of invention he produced much low grade material but some gems too as he honed his art. His fortunate inclusion in ‘the Club’ of Samuel Johnson gave him an introduction to many of the City’s literati. He is pictured above [far right] in distinguished company with other of Dr Johnson's choice companions. Though Boswell depicted him as a ridiculous, blundering, but tender hearted and generous creature.

His most famous works are his novel The Vicar of Wakefield (1766) a humorous melodrama and his short and ironic poem An Elegy on the Death of a Mad Dog of the same year ; his poem The Deserted Village (1770) a lament on a fictional Irish village in the Midlands and his play She Stoops to Conquer (1773) a comedy of manners, all made his name. He also turned out many works of lesser importance incl Histories and works on Philosophy which helped give him a lucrative income.
He was known as a very generous man but with extravagant tastes and when he died he owed £2,000 – a small fortune in those days. He had a close relationship with Mary Horneck, with whom he fell in love in 1769 but they never married. He died after a short illness in 1774 and was buried in the Church of St Mary or ‘The Temple’. His Latin Epitaph by Johnson was praise indeed:


Oliver Goldsmith: A Poet, Naturalist, and Historian, who left scarcely any style of writing untouched, and touched nothing that he did not adorn. Of all the passions, whether smiles were to move or tears, a powerful yet gentle master. In genius, vivid, versatile, sublime. In style, clear, elevated, elegant.


A statue of him stands outside the front doors of his old Alma Mater, Trinity College Dublin.