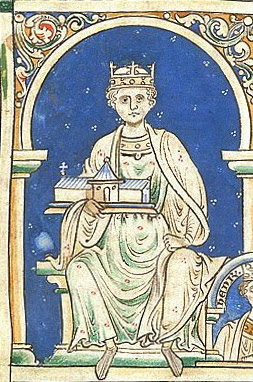 16 April 1172: King Henry II departed from Ireland on this day. He had landed in Waterford in October 1171 with a powerful force of well-equipped knights, archers and foot soldiers. He subsequently received the allegiance of many of the provincial kings of Munster and Leinster. However the High King of Ireland Rory O’Connor/Ruaidrí Ua Conchobair kept his distance and the chief Ulster kings ignored Henry’s visit alltogether. King Henry though was the most powerful man in Western Europe and his name alone carried tremendous weight. He ensured by his presence at the Irish Church’s Council of Cashel that the type of Church Reform in favour in England was adopted in Ireland.
While his Ecclesiastical Mission was the purported reason for his Expedition into Ireland he also had designs to bring the whole of the Country under his sway. He brought to heel his Anglo-Norman mercenaries and adventurers and tried to ensure that they recognised that anything they had taken in Ireland was his to grant and not theirs by right of conquest. He arrived in Dublin in mid November and wintered over in Dublin. He stayed outside the walls and in a Palace made of wattles that was specially built by local craftsmen. There he celebrated Christmas in some style, entertaining his guests lavishly. This rustic Court served as his Royal seat of power for the duration of his stay in the City.


His most compelling reason for coming to Ireland when he did however was his implication in the Murder of St Thomas Becket at Canterbury Cathedral and the wrath that came down upon him from the Papacy as a result. So Ireland was a politic place for him to be until the furore died down and he judged it safe to return. Though Henry probably meant to spend a few more months in Ireland events abroad meant that he had to cut short his stay here and return forthwith. The winter was a bad one and few ships reached Ireland that carried any news of worth. Sensing that somewhere in his patchwork quilt ‘Angevin Empire’ would require his attention before too long Henry left Dublin for Wexford in the month of March for the port of Wexford. It was there he received news that the Papal Legates awaited him in Normandy to demand explanations for his conduct. He thus departed from our shores on the Easter Sunday of 1172– never to return.


The king of the Saxons (namely, Henry, son of the Empress) went from Ireland on Easter Sunday [April 16th] after celebration of Mass.

The Annals of Ulster