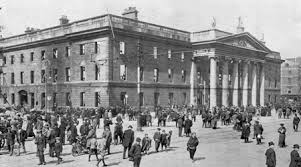 25 April 1916: A statement was issued from the Insurgent HQ in the GPO Dublin on this day.

THE PROVISIONAL GOVERNMENT To The CITIZENS OF DUBLIN

The Provisional Government of the Irish Republic salutes the Citizens of Dublin on the momentous occasion of the proclamation of a SOVEREIGN INDEPENDENT IRISH STATE, now in course of being established by Irishmen in arms.

The Republican forces hold the lines taken up at twelve noon on Easter Monday, and nowhere, despite fierce and almost continuous attacks of the British troops, have the lines been broken through. The country is rising in answer to Dublin’s call, and the final achievement of Ireland’s freedom is now, with God’s help, only a matter of days. The valour, self-sacrifice and discipline of Irish men and women are about to win for our country a glorious place among the nations.


Ireland’s honour has already been redeemed; it remains to vindicate her wisdom and her self-control. All citizens of Dublin who believe in the right of their country to be free will give their allegiance and their loyal help to the Irish Republic. There is work for everyone: for the men in the fighting line, and for the women in the provision of food and first aid. Every Irishman and Irishwoman worthy of the name will come forward to help their common country in this her supreme hour. Able-bodied citizens can help by building barricades in the streets to oppose the advance of the British troops. The British troops have been firing on our women and on our Red Cross. On the other hand, Irish Regiments in the British Army have refused to act against their fellow-countrymen.


The Provisional Government hopes that its supporters which means the vast bulk of the people of Dublin—will preserve order and self-restraint. Such looting as has already occurred has been done by hangers-on of the British Army. Ireland must keep her new honour unsmirched. We have lived to see an Irish Republic proclaimed. May we live to establish it firmly, and may our children and our children’s children enjoy the happiness and prosperity which freedom will bring.
Signed on behalf of the Provisional Government, P. H. PEARSE,


Commanding in Chief of the Forces of the Irish Republic, and President of the Provisional Government.
Meanwhile the British continued their preparations to crush the Rising. Lord French, the Commander of the British Army in Britain organised for an Expeditionary Force to be immediately despatched to Ireland. Within the Country General Lowe sent reinforcements from the Curragh to Dublin by train. More arrived from Belfast to bolster their positions. The General decided to seal off and isolate the various strongpoints and await further reinforcements. He established a tightening cordon in the outskirts of the City to stop any further support reaching the Volunteers and to guard against any breakout.

About 100 or so British soldiers seized the Shelbourne Hotel overlooking St Stephens Green and forced the Irish Citizen Army to withdraw under fire to the adjacent College of Surgeons. Commandant Daly who had seized the Linen Hall Barracks in north central Dublin set it alight to stop the British from using it as a base of attack.

Inside the GPO, work continued fortifying the building against attack. In order to improve communications, holes were tunnelled into the adjoining buildings. In this way, it became possible to move unseen from building to building thus avoiding sniper fire.

Artillery guns from the Curragh were used to bombard Republican positions.

A small contingent of Volunteers from Maynooth reached the Republican lines in the City after a forced march. Others arriving from the Country were not so lucky as the British tightened their hold.

Trinity College was secured by the British military and fortified by an ad hoc force of soldiers and students of the Colleges’ OTC and was then used as a base to harry communications between the various insurgent garrisons.

The South Dublin Union (now St James Hospital) garrison under vice Commandant Cathal Brugha was attacked but held out even though the fighting spread through the wards and corridors.

On this day the rumours began, and I think it will be many a year before the rumours cease The Irish Times published an edition which contained nothing but an official Proclamation that evily-disposed persons had disturbed the peace, and that the situation was well in hand. The news stated in three lines that there was a Sinn Fein rising in Dublin, and that the rest of the country was quiet.

No English or country papers came. There was no delivery or collection of letters. All the shops in the City were shut. There was no traffic of any kind in the streets. There was no way of gathering any kind of information, and rumour gave all the news. ...... It was believed also that the whole country had risen, and that many strong places and cities were in the hands of the Volunteers. Cork Barracks was said to be taken while the officers were away at the Curragh races, that the men without officers were disorganised, and the place easily captured. It was said that Germans, thousands strong, had landed and that many Irish Americans with German officers had arrived also with full military equipment."

James Stephens The Insurrection in Dublin