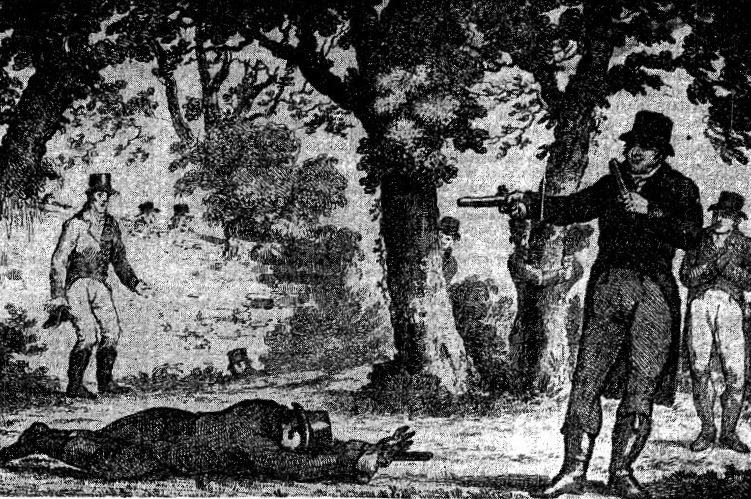 2 February 1815: Daniel O'Connell killed John D'Esterre in a duel at Bishopscourt, near Naas Co Kildare. The encounter came about after D’Esterre [a provision merchant and a member of Dublin Corporation] believed he had been insulted by O’Connell.

The cause of the duel was a political speech made by O’Connell to the Catholic Board on 22nd January, 1815 in which he described the ascendancy-managed Dublin Corporation as beggarly and refusing to apologise for his criticism of Dublin Corporation's neglect of Catholics, . D’Esterre, at the time nearing bankruptcy took this as a personal insult and sent O’Connell a letter demanding a withdrawal of the statement. When this letter went unanswered, he sent a second letter which O’Connell responded to, asking D’Esterre if he wanted to challenge him, why hadn’t he yet done so. D’Esterre set out to provoke O’Connell into a challenge, and at one stage ventured out onto the streets of Dublin looking for him, horsewhip in hand only to be forced into seeking refuge in a sympathetic home, such was the crowd that began to follow him around.

D’Esterre was a man whose luck seemed to have run out. He was facing a disastrous bankruptcy, his marriage was on the rocks if not already over. His wife was pregnant with his second child. He may also have been a victim of circumstances. While it was he who took exception to O’Connell’s remark of “beggarly” on January 24th in relation to Dublin Corporation (in retaliation for its earlier anti-Catholic resolution) and sent his challenge to a man who could not refuse as his personal courage was being publicly questioned of late years.

A duel was thus arranged to settle the matter. The appointed time on the day set was at 3.30 p.m. O’Connell arrived at three and seemed to be most calm and collected, but fell on his backside as he crossed a ditch onto the “pitch”. Undeterred he, and more so his seconds, prepared professionally. D’Esterre arrived at 4pm. It took 40 minutes or so to decide the means, etc. i.e., a case of pistols each, ten paces apart, to fire according to his judgement at the drop of a handkerchief Their last exchange of words meant there was going to be no back-down.

D’Esterre then very honourably stated that he had no animosity towards Catholics whatsoever. At the signal he moved and fired first but missed very badly, his shot falling short. It’s possible this was deliberate as he was an ex Officer in the Royal Marines and a crack shot by all accounts. He may have expected O’Connell to reciprocate in kind. But it was not to be and almost instantly O’Connell (who seems to have been no mean shot himself) fired and hit his target. D’Esterre instantly collapsed shot through the lower spine. Still alive he was carried away clinging to life. In two days he was dead having bled to death.

O’Connell returned in a triumphal cavalcade back to Dublin where his deed earned him respect as a man not be trifled with in Public Life. But O’Connell soon had regrets and he set up a pension for his dead opponent’s daughter and later went to great efforts to conduct legal business for the widow of D’Esterre.