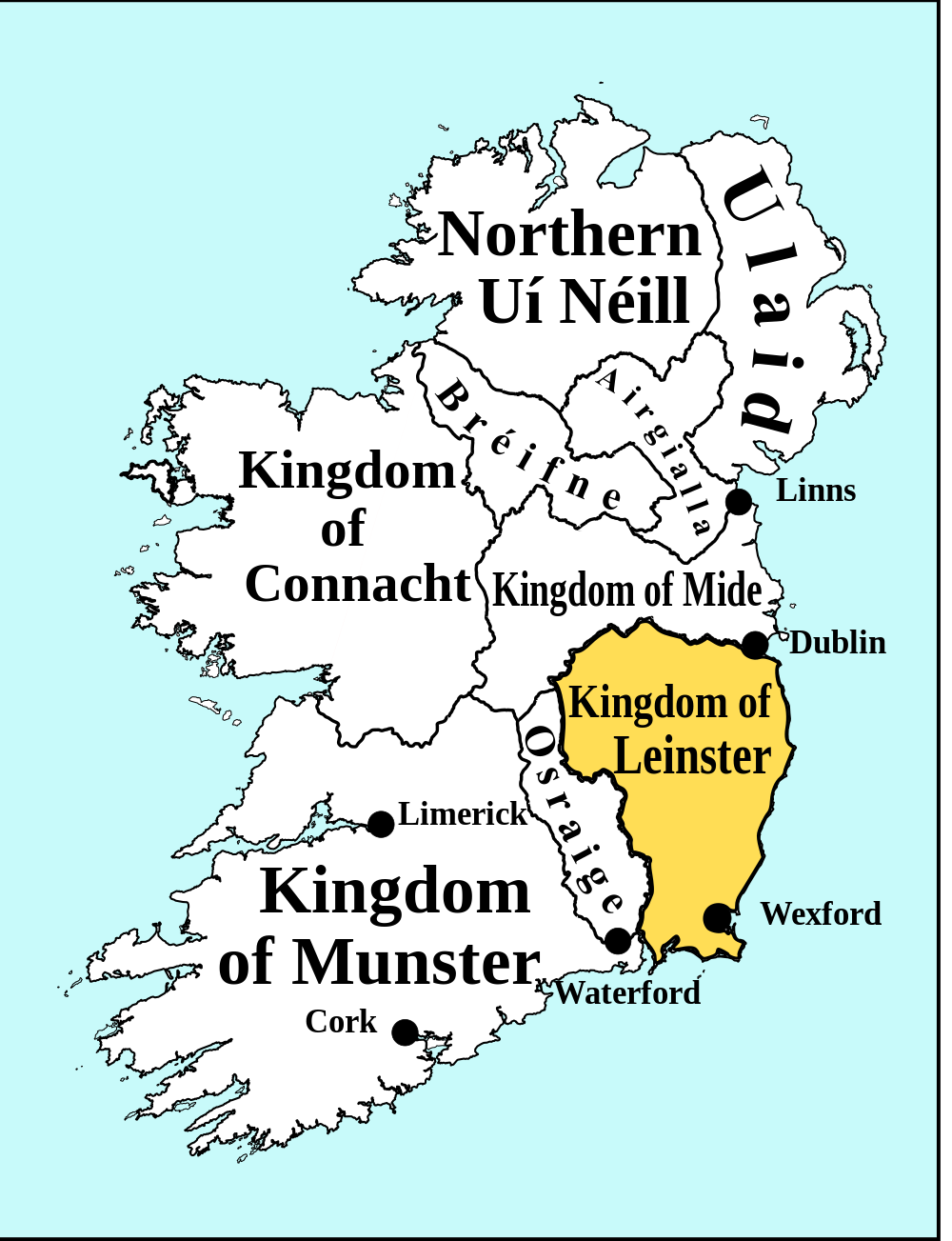 7‭ ‬February‭ ‬1072‭ ‬AD:‭ ‬Diarmait mac Maíl na mBó,‭ ‬king of Laigin [Leinster],‭ ‬died on this day.‭ ‬He was one of the most colourful and dynamic Irish kings of the‭ ‬11th Century and an ambitious ruler of his own province that wished to rule over all of Ireland.‭ ‬While he never achieved that lofty aim it was not for want of trying.‭ ‬He was of the‭ ‬Uí Cheinnselaigh family,‭ ‬who had their base around the monastical centre of Ferns‭  ‬in Co Wexford.‭ ‬His family had long been excluded from the kingship of Laigin and he was the first member of this ancient sept to hold the position in centuries.‭ ‬By the time Diarmait acceded to the kingship in‭ ‬1042 his familial domains included sway over the Viking towns of Wexford and Waterford and with it access to Trade and Fleets that enhanced his power and wealth.
However his breakthrough into the world of being a serious player in provincial politics and international affairs came in‭ 1052 when he captured the city of Dublin and declared himself its king – a feat not even Brian Boru had accomplished. The acquisition of one of the main trading entrepots of north western Europe meant that King Diarmait had direct control over a powerful fleet of warships and merchantmen.

These vessels plied their way up and down the Irish Sea and interlinked into a vast trading network that stretched to Spain and North Africa to the south and across to the great rivers of Russia to the East.‭ ‬With this kind of naval power at his disposal he was not averse to using it and after installing his son Murchad as King of Dublin he had his offspring invade the Norse held Isle of Man  in 1061 and put it under his rule.

Diarmait also became involved in the internal politics of Wales and Saxon England.‭ ‬He supported many of the Welsh Princes in their efforts to gain dominance in that Country.‭ ‬He most notably supported the attempts of Cynan ab Iago of Gwynedd to restore himself to power in north Wales, possibly in return for some kind of payoff in trade or suzerainty. In the winter of 1051/52 he had no less a visitor than Harold Godwinesson, the future King Harold of England, who sought refuge here against his enemies at home. After that King’s defeat and death at the battle Hastings in 1066 his sons fled here to escape the Norman invaders and King Diarmait provided them with a fleet of sixty six ships to raid the coast of England to try to regain that Country for the Saxons. While they did not prevail the fact that the king of Leinster was where these hapless sons of the late Saxon king turned for help is indicative of his power and prestige at this time.‭

The King of Leinster was also active in engaging with his royal rivals within Ireland too.‭ ‬He allied with the Ulaid of the North and raided into Connacht and Meath.‭ ‬However it was in Munster he had his greatest success amongst the Gaels.‭ ‬He backed Turlough O’Brien as puppet king of that province,‭ ‬forcing the previous incumbent King Donnach to depart on a pilgrimage to Rome where he died. In 1067 he led a huge expedition into Connacht consisting of the men of Laigin, the Munstermen under Turlough O’Brien and a contingent from the kingdon of Breffni. A great battle was fought in which fell Aed O’Connor, the most powerful king of the western province. With this Victory there was no doubt that Diarmait mac Maíl na mBó was the most powerful king in Ireland and in effect an  Ard Rí na hÉireann - the High King of Ireland.

But while Fortune had favoured Diarmait for most of his life in‭ 1070 tragedy struck when his beloved son Murchad died in battle against the men of Meath while on a raid. In 1072 it was Diarmait’s turn to go the way of all flesh when he too fell in battle against the warriors of the middle kingdom of Míde [Meath] in the battle of Odba. His slayer was King Conchobor ua Mael Sechnaill, of the traditional kings of Míde. Ironically his killer was himself treacherously slain the following year by his own nephew in an internal power struggle.

The Annals of the Four Masters recorded Diarmait’s death as follows:
‭"‬Diarmaid,‭ ‬son of Mael-na-mbo,‭ ‬King of Leinster, of the foreigners of Ath-cliath, and of Leath-Mogha-Nuadhat, was slain and beheaded in the battle of Odhbha, on Tuesday, the seventh of the Ides of February, the battle having been gained over him by Conchobhar O'Maeleachlainn, King of Meath. There were also slain many hundreds of the foreigners and Leinstermen, along with Diarmaid, in that battle. In it was killed Gillaphadraig O'Fearghaile, lord of the Fortuatha, &c.

It was Diarmait’s career and his relative success that coined the phrase‭ rí Érenn co fressabra that is ‘king of Ireland with Opposition’ ‬and indeed that is a fair summary of where he stood when he fell beneath the weapons of his enemies.