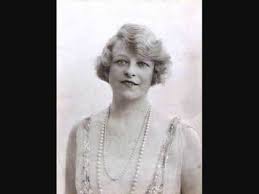 16 April 1958: Margaret Burke Sheridan the famous Soprano died on this day. At the height of her fame she was ranked amongst most famous Prima Donnas’ of the World of Opera. She came from a modest but respectable background in the town of Castlebar Co Mayo where her father was the Postmaster.

However tragedy struck her early in life and by the time she was 11 she was an orphan. To further her education she was packed off to Dublin and placed in the care of the Dominican nuns at Eccles Street, Dublin. It was there that she received her first singing lessons from Mother Clement who was a noted music teacher. Margaret won a gold medal at the Feis Ceoil [Festival of Music] in 1908 and showed so much musical promise that a benefit concert was given in the old Theatre Royal in Dublin to help fund her studies at the Royal Academy of Music in London.

It was there that her career really took off as was given leading roles in some of the leading Operas of the day. She quickly became known as ‘La Sheridan’ as her fame spread. It was there that the great inventor Marconi heard her sing and proclaimed “yours is the voice I’ve been waiting to hear all my life”. He decided that she must go to Italy to further her career.

She became a singing sensation in Italy as audiences were captivated by her rich and lyric soprano voice. The conductor Toscanini dubbed her “the Empress of Ireland” and she was chosen to sing at the wedding of the Italian Crown Prince, Umberto. Margaret made numerous recordings including the first ever complete recording of Madame Butterfly in 1930. In the 1920’s People said there were only three people known outside of Ireland, Eamon De Valera, John McCormack and Margaret Burke Sheridan.

But Margaret’s time at the pinnacle was to be a short one. In 1936 she developed throat problems that stymied her career. She had an operation but it was limited in its success. In an Art where perfection is paramount she realised that her time was up and chose retirement over ridicule.

She returned to Dublin and while she kept away from the Limelight she did continue to sometimes sing, notably her interpretations of Moore’s Melodies and her rendition of Balfe’s “I Dreamt I Dwelt in Marble Halls”. She sang in public on and off but basically she just socialized around the town where she was known as quite a character. She kept a small flat near Fitzwilliam St and was a ‘regular’ in the exclusive Shelbourne Hotel. She also spent some time with a wealthy patron in New York. Her end came in April 1958 when she died of cancer in the Pembroke Nursing Home on Leeson Street. She is buried in Glasnevin Cemetery Dublin.