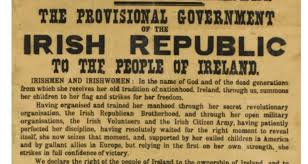 24‭ April 1916: The Easter Rising/ Amach na Cásca began. The Irish Volunteers and the Irish Citizen Army seized various locations around the centre of Dublin including:

The GPO‭; The Four Courts; Boland's Mill, Jacob’s biscuit factory; St. Stephen's Green and strategic buildings such as the South Dublin Union (now St. James' Hospital) as well as important approaches to the city such as Mount Street Bridge. Outbreaks of street fighting in the City commenced as the insurgents engaged members of the Crown Forces and endeavoured to secure their positions.

About noon outside the GPO Padraig Pearse read out the Proclamation of the Irish Republic:

IRISHMEN AND IRISHWOMEN:‭ In the name of God and of the dead generations from which she receives her old tradition of nationhood, Ireland, through us, summons her children to her flag and strikes for her freedom….

Apart from the GPO the other garrisons of the insurgents were distributed as follows:

That day the men in the GPO fired upon patrol of British Lancers making their way down Sackville [O'Connell St]‭ killing some of them and forcing the others to flee. There was also fighting at St Stephens Green, Dublin Castle, and the North Wall. Commandant Daly seized the British Army’s Linen Hall Barracks in north central Dublin.

Overall the armed clashes on Easter Monday were little more than skirmishes as the British were dumbfounded by the day’s events.‭ However they quickly rallied and desperate measures were implemented to hurry reinforcements to the City to regain Dublin from the Irish ‘Rebels’.