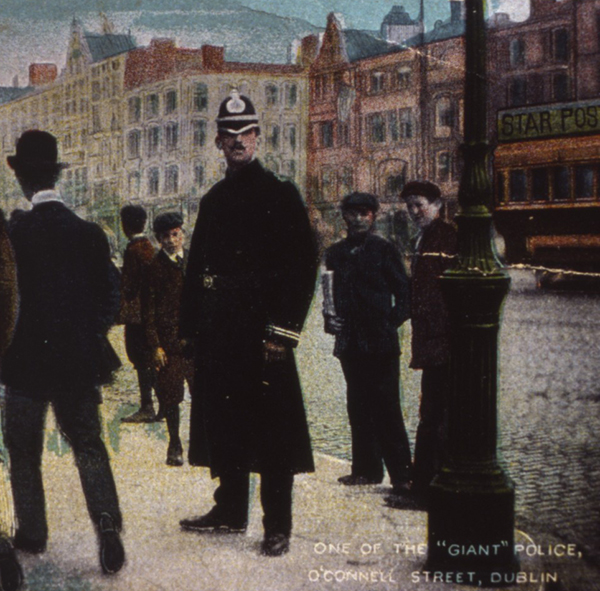 3‭ ‬April‭ ‬1925: The amalgamation of the Dublin Metropolitan Police (DMP) with An Garda Síochána  took place on this day.

The Capital’s own Police Force had been established under an Act of the British Parliament in‭ 1836 and the force had become operational in January 1838. It was closely modelled on the London Metropolitan Police founded by Sir John Peel. While never a greatly popular force with Dubliners the DMP had nevertheless proved to be a magnet to men (mostly countrymen) in search of secure employment in the city with a guaranteed pension at the end of their service. Its members were unarmed unless on specific duties and the individual members relied on their formidable physical strength to settle affairs on the street when necessary. Among the generally undersized citizenry of Dublin they certainly stood out as men not to be trifled with.

Things started to turn sour for the DMP in‭ 1913 when there was serious labour unrest in Dublin. In a fight for Trade Union recognition the employers resorted to locking out the workers till they dropped their demand for the right to belong to one. The DMP as a result found itself involved in upholding the interests of the employers at the expense of the workers rights. Vicious street battles developed with the police involved in sometimes fatal baton charges, which lost them a lot of credibility and respect with the public. Of course the DMP men suffered too! Then the events of 1914, when the DMP and the British Army tried unsuccessfully to block the distribution of the weapons landed at Howth, further weakened their morale and general standing. Indeed as a result of this incident the Assistant Commissioner had to resign.

The outbreak of the Great War saw a considerable number of the men volunteer for war service from which,‭ no doubt, a high proportion never returned. The Easter Rising of 1916 was yet another shock to its morale. By the time the War of Independence started in 1919 the force was at a low ebb, which the events of the next two and a half years did nothing to alleviate. By and large they escaped the deadly fate of so many of their counterparts in the RIC simply because of their unarmed status. So long as they turned a blind eye to the activities of the IRA then they were allowed to proceed with the enforcement of the civil law. Not so the men of the ‘ G ’ Division. They were armed and were tasked by the British with hunting down Republicans in the city. Michael Collins had his own answer to them: the men of  ‘ the Squad ‘, a select group of gunmen who were given the job of eliminating especially dangerous opponents of the Republic in Dublin. In this they succeeded brilliantly, and effectively put a stop to the flow of intelligence to the British administration in Dublin Castle.

By the Summer of‭ 1921 Irish recruitment to the DMP was at a standstill and the ranks had to be filled by taking on men from across the water, many of them British ex-servicemen. With the Truce of July 1921 the DMP was left hanging in the air, not knowing whether they would be kept on or swept aside in the impending change of government. When the new Government took over they decided to retain the DMP at least temporarily as the only fully trained Police Force in the State. In Irish the Force was known as Políní Áth Cliath and cap badges were issued to reflect this.

In‭ 1923 Major General W.R.E. Murphy DSO, MC was appointed to command as Chief Commissioner and he was able to instil a sense of purpose back into the Force. ‬He had numerous difficulties to contend with both internal and external.‭ ‬Many of the men wished to retire and Jim Larkin had returned from America and organised a series of Strikes across the City. On the other hand Murphy was instrumental in ensuring that Frank Duff’s efforts to shut down the notorious Red Light district known as the Monto succeeded. In sport the DMP continued to enjoy great success their crowning glory being winning the World Tug of War Championship in London in 1924.

However Kevin O’Higgins had decided that two police forces in one State was one too many and in‭ 1925 the DMP was amalgamated into An Garda Síochána. Murphy became a Deputy Commissioner of the Garda under General O’Duffy with whom he had served in the Irish Civil war. Thus after a run of 87 years Dublin’s own Police Force with its formidable Constables came to be seen no more on the streets of the Fair City.