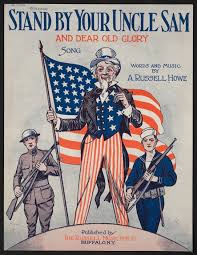 6 April 1917: The United States of America declared War on Imperial Germany. In a move long anticipated by both sides in the Great War the USA finally came in on the side of Allies and changed the outcome of the War and of modern world history.

The seeds of America’s intervention went right back to the opening months of the War. The overwhelming opinion of the American people was on the side of the Allies. However amongst the considerable German and Irish populations the feeling was far different. The Germans were naturally sympathetic to the Fatherland and acted accordingly.

The Irish in the USA were not pro German but they were very much anti British – feelings heightened by recent events in Ireland where prior to the outbreak of War it looked like Civil War would break out at home over the ‘Home Rule Crisis’. The Irish in America were well organised especially in the cities and ‘ran’ many of them ie Tammany Hall in New York City. The Ancient Order of Hibernians had a huge but open membership while behind the scenes there was the clandestine Clan na Gael dedicated to overthrowing British Rule by force of arms. Clearly it was in the interests of Irish America to keep their adopted Country out of the War.

However the reports of German atrocities in Belgium and more importantly the opening of unrestricted U boat attacks on Neutral shipping in the waters around Britain and Ireland caused huge resentment in the USA. This climaxed when in May 1915 the Cunard liner Lusitania was sunk off the town of Kinsale Co Cork. Over a thousand men women and children were drowned incl. over 100 US citizens. Outrage on a massive scale followed. While the Germans called off their attacks on neutrals the damage was done and the general opinion on all sides was that it was a case not if but when the USA would enter the War against Germany.

The Easter 1916 Rising at home certainly put Ireland’s Cause briefly into the spotlight but it could not be sustained. Britain needed to trade with the USA to supply it with armaments and raw material to sustain the War. This in turn generated vast profits for American Corporations. Without this Trade then Britain would have to sue for terms from Germany and would have defaulted on its debts to the US. By early 1917 with Russia effectively stymied by the ‘February Revolution’ and France on her last legs militarily the German High Command took the risk of re activating their unrestricted U Boat campaign to bring Britain to her knees before America could intervene. However this backfired as it only angered America even more and pushed her over the edge. Events moved swiftly and on 6 April the USA declared War.  It was a watershed in the History of Europe as for the first time ever the fate of a war between the European Powers was decided by decisions made on by another Power on another Continent.

For Ireland it meant that any pressure that could be exerted on Britain by the USA was severely weakened as President Woodrow Wilson put support for Britain at the top of his priorities. In his War Message to Congress, Wilson declared that the United States' objective was “to vindicate the principles of peace and justice in the life of the world.”

He wished to see the European peoples be free from outside occupation i.e. an Independent Poland. But there was no mention of Ireland.

On the other hand the British had to be careful not to antagonise US Public opinion into thinking that she was the oppressor of the Irish people now that the Empire was so reliant on Uncle Sam to finish the War. So America’s entry was a mixed blessing for Ireland - on the one hand we could not rely on the US Government to do much for the cause of Irish Nationalism and on the other the British Cabinet had to be careful not to trigger another revolt while they were so heavily committed abroad and so reliant on America to turn the tide against Germany.