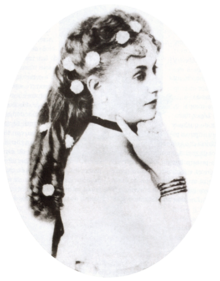 25 July 1886: Eliza Alice Lynch Lloyd died in the city of Paris on this day, an exile from the land of her birth in Ireland and the land of her Husband and children – Paraguay! Almost unknown in her native Country she is the most famous woman in the History of Paraguay where she reigned as the unofficial ‘Queen of Paraguay’ for a number of years.

Eliza started life in the city of Cork in 1833, she was the daughter of John Lynch, MD. and Jane Clarke Lloyd. When she was about 15 her family left Ireland for Paris, probably to escape the terrible conditions that beset Ireland at that time. A young and attractive girl she was wooed by a Xavier Quatrefages, an officer in the French Army. They married but it looks like it was an arranged affair and Eliza was not happy with the Union. Her husband was posted to Algeria and she followed him out there. But it did not last and she left him to return to her mother in Paris.

Her prospects were not great but she was a good looker, young blond and ambitious. She put her feminine skills to use as a Courtesan moving in the circle of Princess Mathilde Bonaparte. It is believed that it was at this time (circa 1854) that she caught the eye of one General Francisco Solano López, the son of none other than Carlos Antonio López the President of Paraguay. The young man had been dispatched to Paris by his father to buy armaments to equip the Army of his Country. He quickly fell in love with the young Irish beauty and she with him.

He decided to take her with him on his return home to the capital city of Asunción. But for whatever reason they did not marry. Her marriage was annulled in 1857 but Eliza was never accepted by the social oligarchy of the City. They shunned her as a fallen woman. Notwithstanding all this she bore her husband six children in total. He gave her extensive properties that made her nominally fabulously wealthy but all this Power and Wealth as the unofficial 'Queen of Paraguay/La Reina del Paraguay brought her jealousy from those who thought she was an upstart and a blow in.

In 1862 Francisco succeeded his father as President. An impetuous man he was concerned and angry with the decision of Brazil to invade the neighbouring state of Uruguay believing that he must oppose this in arms. In 1864 he declared war on Brazil. This proved to be a disastrous move as the Empire of Brazil was far more powerful than tiny Paraguay. Eventually he was at War with Brazil, Argentina and Uruguay - 'The War of the Triple Alliance' - and the Country suffered terribly when Paraguay was invaded. According to some estimates, Paraguay's pre-war population of 525,000 was reduced to 221,000, of which only 28,000 were men.

In all of this Eliza went with her husband to the battlefields where she and her sister volunteers nursed the wounded as best they could. They were known as Las Residentas, composed of the soldiers' wives, daughters, and others. It was from involvement in helping the common soldiers that Eliza’s popularity with the Paraguayan People comes from.

However the invading Powers eventually overran the Country and a bitter guerrilla war ensued. They eventually closed in on the increasingly paranoid and brutal Francisco López and his family and their band of ragged but loyal followers.

The end came at the battle of Cerro Corá on 1 March 1870 when López was finally killed. To add to the trauma of Eliza her eldest son was shot down and killed in front of her. The Brazilian officers told him to surrender, and upon replying "Un coronel paraguayo nunca se rinde" (A Paraguayan colonel never surrenders) he was shot and killed by the allied soldiers. At this Lynch, after jumping and covering her son's body, exclaimed "¿Ésta es la civilización que han prometido?" (Is this the civilization you have promised?) - making a reference to the allies' claim that they intended to free Paraguay from a tyrant and deliver freedom and civilization to the nation. She then buried both López and her son with her bare hands before being led away as prisoner.

She thus was taken captive and subsequently expelled from Paraguay with her remaining children.  She died in obscurity in Paris on 25 July 1886. Over one hundred years later, her body was exhumed and brought back to and proclaimed a National Heroine. Her remains are now located in the national cemetery "Cementerio de la Recoleta".