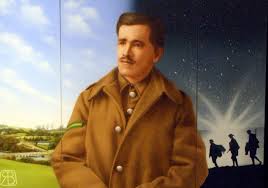 31 July 1917: The death of  the Irish Poet Francis Ledwidge at the battle of Battle of Passchendaele on this day. He was killed when a German shell landed amongst the work detail he was with near the village of Boezinghe and blew him and five of his comrades to pieces.

Francis Ledwidge was born near the village of Slane Co Meath in 1887. His family were not well off after the death of his father and he left school at age 13 to work on the roads. However he became interested in poetry and wrote on the Nature and history of the Boyne Valley. Encouraged by a local curate, Fr Smith, Ledwidge began contributing his poetry to the Drogheda Independent. Ledwidge was later befriended by Lord Dunsany who would become an invaluable patron.

Raised in the Irish Nationalist tradition he joined the Irish Volunteers and trained with the local battalion to resist Partition and to secure Ireland her own Parliament. When the First World War broke out he was shocked at the atrocities reportedly carried out by the German Army and though initially sceptical he decided to enlist in the British Army:

‘I  joined the British army because England stood between Ireland and an enemy common to our civilisation, and I would not have had it said that she defended us while we did nothing at home but pass resolutions.'

On 24 October he joined Lord Dunsany’s regiment, the 5th Battalion of the Royal Inniskilling Fusiliers, 10th (Irish) Division at Navan, and was sent to Richmond Barracks in Dublin. He first saw action at Gallipoli in July 1915 against the Turks. He took part in the landings at Suvla Bay in August that were yet another costly Fiasco. By October the 10th Division was posted to Serbia and saw action against the Bulgarians. Ledwidge survived, but damaged his back during the retreat to Salonika, and was subsequently hospitalised in Cairo and later in Manchester.

It was while convalescing  there that word reached him that there had been a Rising in Dublin and that his friend Thomas McDonagh had been executed by the British. He was shattered by this news and became disillusioned with the War effort. In conversation with his brother Frank, his change of heart was revealed when he said that ‘if someone was to tell me now that the Germans were coming over the back wall, I wouldn’t lift a finger to stop them'.

Ledwidge returned to the front in France in the second half of 1916, and saw action at the Battle of Arras in the spring of 1917. His battalion was then ordered north to Belgium in preparation for the 3rd Battle of Ypres. The offensive began on 31 July 1917, but Ledwidge was kept in reserve behind the lines and put to work laying roads. While Ledwidge was drinking tea in a mud hole with his comrades, a shell exploded alongside, killing the poet and five others. A chaplain who knew him, Father Devas, arrived soon after, and recorded "Ledwidge killed, blown to bits."

The battle of Passchendaele ended some 100 days later with over 245,000 Allied and 215,000 German soldiers dead wounded and missing. Francis Ledwidge might have been amongst the first Irishmen to die at 3rd Ypres. Today though he is one of the very few who are remembered for their sacrifice in it and the contradictions he faced between his love for Ireland and his hatred of Tyranny as expressed in his evocative Poetry.

The silence of maternal hills
Is round me in my evening dreams;
And round me music-making rills
And mingling waves of pastoral streams.

Whatever way I turn I find
The path is old unto me still.
The hills of home are in my mind,
And there I wander as I will.
In France
February 1917