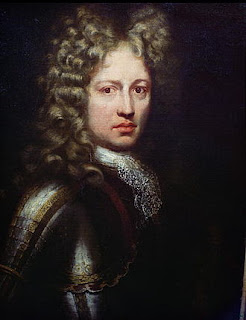 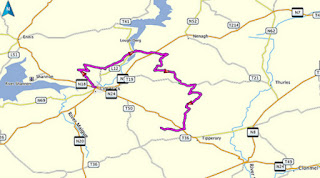 11 August 1690: The raid at Ballyneety on this day. In one of the most dramatic and successful attacks by the Jacobites in the War of the two Kings the dashing Irishman Patrick Sarsfield led as cavalry force that destroyed the siege train of the Dutchman William of Orange as he attempted to besiege the city of Limerick.

The Williamite Army had approached the city at the beginning of August but were not in a position to storm it off the march. While the walls were old and weak there was a substantial Jacobite garrison within who were determined to fight. A direct frontal assault with no artillery support would be a very costly affair and with no guarantee of success. King William realised he would have to wait until his siege train coming from Cashel reached him for any viable attempt to take the city was undertaken. He needed that siege train to conclude that years campaign and cap his great victory at the Boyne before he could return to England in Triumph and turn his attention to ruling over his newly acquired Kingdom of Great Britain.

However word of the approach of the siege train had Limerick by the word of deserters and Patrick Sarsfield pressed for a cavalry force to sally out and locate and destroy this vital convoy that tip the balance against the desperate defenders and grant King William yet another Irish city to add to his conquests.

Late on the night of 9 August the raiders slipped out through the north gate, picked up some more troopers and made a dash for Killaloe just below Lough Derg and crossed the river Shannon. They turned south and rode and made their way to a place called Ballyneety situated some 10 miles south east of Limerick. They had to match speed with caution to avoid being discovered by enemy patrols and in this aspect they were fortunate to avoid detection. However they were spotted by local Loyalists who reported to Williams’ officers that a force of mounted Jacobites had crossed the Shannon and were heading south.

Sarsfield and his men must have laid up and rested at some stage as they did not launch their attack until dusk on the evening of the 11th August. The Williamite train had layed up for the night and while they posted guards they were not expecting anything untoward. The password for the night was ironically enough ‘Sarsfield’!

When they struck they struck hard and completely overwhelmed the column, most of whom had bedded down for the night.

Around midnight Sarsfield approached the camp. No attack was expected and it was lightly guarded. As the horsemen stole up a sentry was alerted by the undeadened hoofs and challenged: ‘Who goes there?’ At this, Sarsfield sprang out, his horse rearing and answered: ‘Sarsfield is the word, and Patrick Sarsfield is the man.’ In a flash the intruders overwhelmed the stupefied guards. Standing on their stirrups, they galloped through the camp, cutting down, right and left the half-awakened troopers. There was bedlam as the Jacobites wheeled their horses again and again. Dozens of Orange soldiers were killed and the rest ran like hares in all directions. In the heat of the fray a number of non-combatants, some of whom were women, fell victims to the onslaught. This was a serious blemish on an otherwise daringly executed operation.

Sarsfield must have been pleased with his booty. The siege train contained six twenty-four-pounder cannon; two eighteen-pounders; eight brass ordinances of eighteen inches; 800 balls; 120 barrels of powder; 1,600 barrels of match; 500 hand grenades and numerous other munitions. In all there was 153 wagons (drawn by 400 draft horses). Sarsfield instructed that everything be burnt. The cannons were stuffed with powder and their long barrels stuck into the ground. All the carts, shells, powder, and other explosive material was heaped in a circle and a powder trail laid to the end of the meadow.

Patrick Sarsfield & his men made it back to Limerick in safety even though by then the Williamites had been alerted to the danger to their precious guns but they could not reach the endangered column in time. It was the greatest cavalry raid of the war and a classic of how to stymie an enemy’s ability to besiege a city.