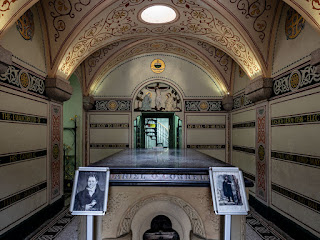 5 August 1847: Daniel O’Connell’s body was interred in Glasnevin cemetery on this day. The ‘Liberator’ had died in Genoa, Italy on 15 May. His last bequest was : “My body to Ireland – my heart to Rome – my soul to heaven”. Thus his body was conveyed back to Ireland for burial.

The Funeral service was held in the Metropolitan Church, Marlborough Street, Dublin, on the 4th August. The following day his cortege made its way through the City on the way to Glasnevin Cemetery. The centre of Dublin came to a standstill as tens of thousands of mourners lined the route as his hearse made its way along Westmoreland Street  and up Sackville St (now O’Connell St) on its way to his resting place in the Graveyard he had help to found. The enormous triumphal car that O’Connell rode in when he was freed from prison in May 1844 led the procession. His Funeral was the largest ever recorded up to that time in Ireland.

In 1869 his remains were re interred in the crypt of the O’Connell Round Tower in Glasnevin Cemetery [above] in a magnificent casket in the base of the structure. There the Liberator lies to this day.