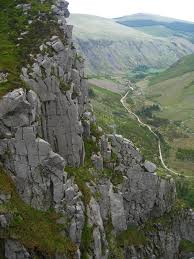 25 August 1580: The Battle of Glenmalure/ Cath Ghleann Molúra was fought on this day. Lord Deputy Arthur Grey de Wilton led an English army into the fastness of the Wicklow Mountains to seek out and kill or capture the Irish Chieftain Fiach MacHugh O’Byrne. This battle was fought during the 2nd Desmond War as the Catholics of Ireland united to stop the encroachments of the English Protestants. O’Byrne was joined in this campaign by Viscount Baltinglass, a member of the old Anglo-Irish colony of the Pale. Before the Reformation began the Gaels and the Palesman would have been traditional enemies but force of circumstance threw them together at this time.

The English leader brought his army of about 3,000 men down from Dublin through the flat Countryside of Kildare before proceeding to strike up into the rugged and wooded mountains of Wicklow in his pursuit of the Irish forces in revolt. But many of his men were raw levies from across the water, unused to the hardships and dangers involved in such an enterprise. As they entered the fastness near Feagh's residence of Ballinacor in the Glenmalure Valley they were attacked and harried from the dense woods thereabouts. The Irish used harquebuses, darts and spears to pick them off one by one. Eventually the English levies began to break and all cohesion lost fled back down the way that they came.

they [the Irish] were laied all along the woode as they shoulde passe behind trees, rocks, crags, bogs, and in covert.

Once the Irish realised the tide of battle had turned in their favour they launched a furious counter attack and massacred any of the fleeing Englishmen they could lay about.

the enemy charged us very hottlye ....

When the insurgents had heard of the approach of such an overwhelming force, they retreated into their fastnesses in the rough and rugged recesses of Glenmalure. The Lord Justice then selected the most trustworthy and best tried captains of his army, and despatched them, at the head of eight or nine companies of soldiers, to search and explore Glenmalure; but they were responded to without delay by the parties that guarded the valley, so that very few of these returned without being cut off and dreadfully slaughtered by the Irish party. On this occasion were slain Peter Carew Master Moor (John), and Master Frans, with many other gentlemen who had come from England in the retinue of the Lord Justice. When this news reached the Lord Justice, he left his camp.

It is estimated that over 800 of the invaders fell in battle that day, around 25% of the total force that had left Dublin some days previously. It was England’s greatest defeat of the Desmond Wars. Amazingly the Irish fielded less than a thousand men on the day itself and were heavily outnumbered but still won the Battle! However this Victory over the Crown Forces did not trigger any nationwide revolt. The resistance to the Tudor Conquest at that time was too disparate and too local in effect to overthrow English Rule. Within a year the War was over and Fiach MacHugh O’Byrne had made his peace with the Crown while Baltinglass sought exile on the Continent.