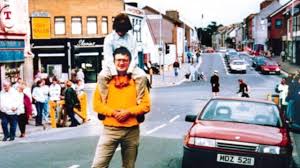 15 August 1998: The Omagh Bombing. On a Saturday afternoon the quite town centre of Omagh Co Tyrone was ripped apart by a single bomb that killed 29 innocent people and injured hundreds more. The atrocity was carried out by a small splinter group of the 'Real IRA' [RIRA].

The group was being monitored by the British Secret Service who knew something was up but failed to pass on any information they may have had to the local RUC. It is an open question though whether this would have made much material difference. Warnings were phoned in but the location for the car bomb were vague. It referred to a bomb in 'Main St' near the Courthouse - but there is no street by that name in Omagh. The RUC started to clear the area where they thought the bomb was but in actual fact they sent people towards its location.

The car bomb detonated at about 3.10pm in the crowded shopping area. It tore the car into deadly shrapnel and created a fireball and shockwave. People were caught in "a storm" of glass, masonry and metal as the blast destroyed shop fronts and blew the roofs off buildings. A thick cloud of dust and smoke filled the street. Twenty-one people who were standing near the bomb were killed outright. Eight more people would die on the way to or in hospital. The people who died included a pregnant woman, six children, and six teenagers.

A 500lb bomb packed in the Cavalier is detonated with a remote trigger. The explosion tears through Market Street. Shop fronts on both sides are blown back on top of customers still inside. Glass, masonry and metal tears through the crowd on the street as a fireball sweeps out from the epicentre. Twenty-one people are killed instantly - some of their bodies were never found, such was the force of the blast. A water main under the road ruptures. Gallons of water gushes out. Some of the dead and badly injured are washed down the hill.

Injured survivor Marion Radford described hearing an "unearthly bang", followed by "an eeriness, a darkness that had just come over the place", then the screams as she saw "bits of bodies, limbs" on the ground while she searched for her 16-year-old son, Alan. She later discovered he had been killed only yards away from her, the two having become separated minutes before the blast.

In the aftermath there was widespread condemnation across the board from all sides. The Good Friday Agreement had been signed only months before and people throughout Ireland were genuinely hopeful that 'The Troubles’ were at an end. Some days later the RIRA admitted that they did it and apologised. But their words fell on deaf ears. 'Enough was Enough' as far as most people were concerned. The bombing campaign was suspended and never reactivated. While there have been deaths and murders in the North since then nothing like this [the worst single bombing atrocity in the Northern Troubles 1968-1998] has happened since.

Photo above: Two Spanish tourists stopped beside the car, and were photographed. The photographer died in the bombing, but the man and child in the photograph survived.