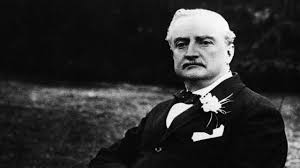 4 August 1914: Great Britain declared War on Germany. That afternoon the British Prime Minister Herbert Asquith addressed the House of Commons in London and set out the reasons for the decision to declare War. Basically it was the crossing of the Belgian border by German forces that morning after Belgium had rejected Berlin’s demand that her armies have free passage across that country in order to attack France.

The problem for Britain was that if France’s northern coast was left open to German Naval operations then it was considered doubtful that she could hold out for long against attack by both land and sea. A quick German Victory in the West would then give the Kaiser a free hand to deal with Russia and thus make Germany the Master of Europe.

Britain however had an ace card to play as a Causi Belli and that was an International Treaty signed in 1839 guaranteeing the Independence of Belgium - which had been signed by both Britain and Prussia! Clearly the German attack on Belgium was a violation of that Treaty and this opened the door for her entering the war on the side of France. The stakes were believed to be just too high for Britain to risk staying out of it and having no influence on the outcome of the War.

That afternoon Asquith addressed a packed and silent House setting out the unfolding events  and the continuing diplomatic communications with Brussels and Berlin. Assurances received from the German Capital that Germany had no territorial ambitions on Belgium and was only acting on their convinced belief that France would attack her through that country otherwise did not find any favour with Asquith and the British Cabinet. Asquith concluded his speech with these fateful words:

I have to add this on behalf of His Majesty's Government: We cannot regard this as in any sense a satisfactory communication. We have, in reply to it, repeated the request we made last week to the German Government, that they should give us the same assurance in regard to Belgian neutrality as was given to us and to Belgium by France last week. We have asked that a reply to that request, and a satisfactory answer to the telegram of this morning—which I have read to the House—should be given before midnight.

The House adjourned at 7.15 pm to meet again the following day. The Cabinet then retired to await the reply from Germany. However as the clock struck 11pm that night and as no reply had been received  Winston Churchill - the First Lord of the Admiralty - noted that it was actually 12 midnight in Berlin so the Cabinet on his prompt decided there and then that there was no point wasting an hour when time was of the essence and the word went out to commence military operations with immediate effect.

The Foreign Office then issued the following official statement:-

No mention of Ireland! But the previous day John Redmond [above] the Leader of the Irish Parliamentary Party in the House of Commons had spoken in that House and had stated that at least Ireland could be defended by Irishmen if the British Army was needed elsewhere.

Today there are in Ireland two large bodies of Volunteers. One of them sprang into existence in the North. Another has sprung into existence in the South. I say to the Government that they may to-morrow withdraw every one of their troops from Ireland. I say that the coast of Ireland will be defended from foreign invasion by her armed sons, and for this purpose armed Nationalist Catholics in the South will be only too glad to join arms with the armed Protestant Ulstermen in the North. Is it too much to hope that out of this situation there may spring a result which will be good not merely for the Empire, but good for the future welfare and integrity of the Irish nation?

Redmond’s proposal was lost in the wash of unfolding events but his decision to support Britain and not oppose the War was a fateful one. Of course with Home Rule on the cards he had to play it careful and this position was one really of neither being in or out of the War. But it was a stance he could not maintain for long as the dramatic and bloody events of the next few weeks were to demonstrate. On the 20th September at Woodenbridge in Co Wicklow he finally threw his hat in the ring and committed his support for Nationalist Ireland's military involvement in the War Effort.