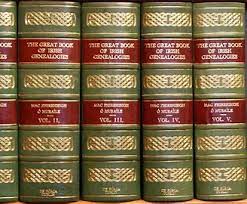 8‭ August 1649: Dubhaltach MacFhirbhisigh, one of the last of the great scribes of Ireland, completed his catalogue of the Kings of Ireland, from Parthalón to Ruaidrí Ua Conchobair, entitled Réim Ríoghraidhe Éireann on this day. This was for inclusion within his masterpiece the Leabhar na nGenealach, or the Book of Genealogies. The work is a compilation of Irish genealogical lore relating to the principal pre Gaelic, Gaelic, Viking and Anglo-Norman families of Ireland and covering the period from pre-Christian times to the mid-17th century collected from a variety of sources. The fact that many of these sources no longer exist adds considerably to the value of Mac Fhirbhisigh's work.

The opening sentence of Leabhar na nGenealach, quoted in 'The Celebrated Antiquary Dubhaltach Mac Fhirbhisigh', goes some way towards describing the contents. It reads

the branches of kinship and branches of genealogy of every invasion which took possession of Ireland from this time up to Adam (except the Fomhóraigh, the Vikings and English, whom we treat of only since they came to our country), together with the history of the saints and the list of the kings of Ireland and finally, an index in which are collected, in alphabetical order, the surnames and famous places mentioned in this book…

This great work stands comparison with‭ ‬The Annals of the Four Masters and is all the more remarkable for being the work of just one man. Preserved over the centuries it was not printed in full until Mayoman Nollaig Ó Muraíle published his comprehensive edition in five volumes (by De Burca books) in 2004. This is one of Ireland’s greatest Literary/Historical Treasures.

Nollaig Ó Muraíle sums up his career as follows:

"... an astonishingly large proportion of the manuscripts we still possess passed through the hands of this one scholar, and it may well be that by that very fact that they have actually survived – thanks to their being passed on (eventually) from Mac Fhirbhisigh to the likes of Edward Lhuyd. Without the great diligence, then, of Dubhaltach Mac Fhirbisigh, as copyist, compiler and translator, and also as collector and transmitter of manuscripts, some quite significant remnants of the civilization that was Gaelic Ireland would have gone into almost certain oblivion. That is his legacy to succeeding generations, and one which merits our undying gratitude."

It might be worth noting that his name is pronounced  “DOOaltach MacIrvishy”. Which was anglicised, incredibly, as “Dudley Forbes”!!!