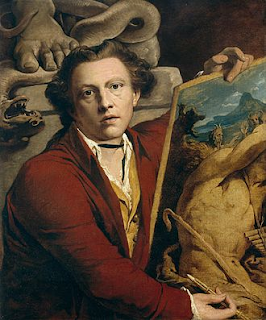 11‭ October 1741: Birth of James Barry, the great neo Classicalist Painter, in Cork on this day. His contemporaries considered Barry a child prodigy. He started painting while still in Cork and then moved to Dublin. There he produced several large pictures, which decorated his father's house, such as Aeneas escaping with his Family from the Flames of Troy, Susanna and the Elders and Daniel in the Lions' Den. The painting that first brought him into widespread public notice, and gained him the acquaintance and patronage of Edmund Burke, was founded on an old tradition of St Patrick visiting Cashel, and of the conversion of its king in The Baptism of the King of Cashel by St Patrick.

After some time in Dublin he made his way to London where he gained the patronage of Edmund Burke and won renown for his artistic talent.‭ He then went on an extended tour, first to Paris, then to Rome, where he remained upwards of three years, from Rome to Florence and Bologna, and thence to Venice. He returned to London in about 1771. There he produced his picture of Venus, which was compared to the Galatea of Raphael, the Venus of Titian and the Venus de Medici.

He is‭ best remembered though for his six part series of paintings entitled The Progress of Human Culture [below] in the Great Room of the Royal Society of Arts in London, in which city he made the rest of his career.

He produced numerous paintings in the course of artistic career that varied greatly in accomplishment but little in style.‭ ‬He was determined to follow his own path in life and in Art and while this won him admiration it also lost him friends and more crucially Patrons in an Age when patronage was essential to social advancement.

He died in London on‭ 22 February 1806 and the following month his remains were interred in St Paul’s Cathedral, London.

Above: Self portrait circa 1803: National Gallery of Ireland