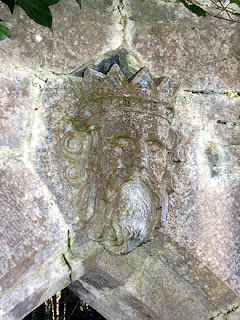 6 October 1175: The Treaty of Windsor was agreed between representatives of Rory O'Connor [above] the High King of Ireland (Ruaidrí Ua Conchobair an Ard Rí na hÉireann) and King Henry II of England on this day. King Rory was the last High King of Ireland.

King Henry forced him to submit as a result of the Anglo- Norman Invasion of 1169 and King Henry’s own Expedition to Ireland in 1170/71. Basically the King of Ireland eventually submitted to circumstances and recognised Henry II as his Overlord.

The negotiations were conducted at Windsor in Berkshire, England.

This is the agreement which was made at Windsor in the octaves of Michaelmas [October 6] in the year of Our Lord 1175, between Henry, king of England, and Roderic [Rory], king of Connaught, by Catholicus, archbishop of Tuam, Cantordis, abbot of Clonfert, and Master Laurence, chancellor of the king of Connaught, namely:

- but a Lordship under English domination.