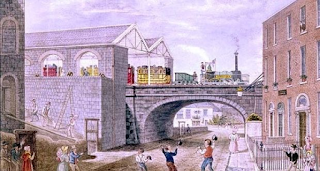 9 October 1834: The first railway in Ireland - the Dublin to Kingstown [ Dún Laoghaire] line - opened for business on this day. The novelty of a railway for commercial purposes was a relatively recent one the first being the Liverpool and Manchester Railway in 1830. The town of Dún Laoghaire some eight miles south east of Dublin possessed a deep water port that was viable for vessels that could not make it up the river Liffey. A group of businessmen decided to develop a rail line between the two urban centres to turn a profit from this new mode of transportation.  For this purpose a company was formed the Dublin and Kingstown Rail Company, with a capital of £200,000, and the necessary Act of Parliament (I & 2 Wm. IV, Cap. 69) received Royal assent on 6th September 1831.

From the start though the scheme met with opposition from two different landowners who insisted on large cash compensations and in the case of Lord Cloncurry  the building of a private foot bridge over the line to a bathing area complete with a Romanesque temple, a short tunnel and a cutting to maintain his privacy!

The contract was given to William Dargan, son of a tenant farmer from near Carlow, who had already established a reputation as a road and canal builder. Work began in April 1833. At one stage 1,800 men were toiling away. Work at the Dublin end went on around the clock. At night the scene was lit by coal and wood fires and blazing tar barrels.

On the 9th instant a train of carriages, crowded with ladies and gentlemen, proceeded the entire length of the line from the station-house at Westland Row to Salt-hill. There were eight carriages attached to the train; one of the first class, three second, and four of the third class. The first trip was made by the locomotive engine called the 'Hibernia",* and with the many disadvantages attendant on a first starting, the trip to the station-house at Salt-hill was performed in fifteen minutes and a half; and back to Dublin in twenty-two and a half minutes Having joined in one of these trips we were delighted with the perfect ease and safety with which it was performed; there is so little motion perceptible even when going at the quickest rate, that we could read or write without the slightest inconvenience.

The Neighbourhood of Dublin: The History of the Dublin and Kingstown Railway

* The Hibernia had been specially built for the Dublin and Kingstown Rail Company by Richard Roberts, a Welsh engineer.