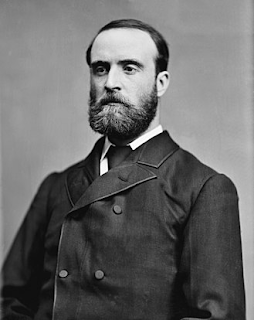 13 October 1881: Charles Stuart Parnell MP was arrested in Morrison’s Hotel, Dublin and conveyed to Kilmainham Jail on this day. The British Prime Minister Gladstone had ordered Parnell’s arrest the previous night after a Cabinet meeting. He then and there dispatched Mr Foster (Britain’s Chief Secretary for Ireland) to Dublin with orders to capture the Irish Leader. Detectives Mallon and Sheridan of the ‘G’ Division of the Dublin Metropolitan Police carried out the arrest. They arrived at the hotel and asked the hotel porter to request an interview with Mr Parnell. The leader of the Land League asked for time to dress and then called up his two visitors who were greeted with the words:

Do you intend to arrest me?

The trio went downstairs and into a waiting cab, though Parnell refused to leave until he had been given 10% off the Bill! Mallon then gave the order to Kilmainham and they set off with a police escort to the notorious jail. Once they arrived Parnell was incarcerated with the other political prisoners already held being held there.

He wrote to his lover Katharine O’Shea when he was arrested:

‘Politically it is a fortunate thing for me that I have been arrested, as the movement is breaking fast and all will be quiet in a few months, when I shall be released’.

For the arrest of Parnell backfired on the British Government as left without a Leader the rural population increasingly turned to 'Captain Moonlight'* to settle agrarian disputes - as Parnell had predicted at the time of his arrest!

By the start of 1882, Irish agrarian unrest escalated to unprecedented levels (3,433 episodes of agrarian violence were recorded) and it was clear to both Gladstone and Parnell that it was time to reach a compromise.

'The 'Kilmainham Treaty' was agreed. The agreement was that Gladstone would amend the Land Act of 1881 to include tenants in arrears and leaseholders; drop coercion; and release ‘suspects’ in police custody. In return, Parnell would help to pacify the people of Ireland and co–operate with the Liberal Party in forwarding Liberal principles and measures of general reform. Parnell was released on 2 May 1882 and crossed directly to England where he made a dramatic appearance in the House of Commons'

* Attackers in the moonlight