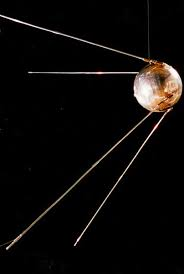 4 October 1957: Sputnik/Спутник over Ireland! The Soviet Union amazed the World when it launched the first man made object into orbit around the Earth – Sputnik 1 - on this day. Sputnik was a small silver-coloured ball 58cm (2 feet) in diameter, with four frond-like antennae and two radio transmitters. Radio stations rushed to record and re-broadcast the crackly 'beep-beep' signal emitted by the satellite, and it became an iconic sound for a new era - the space generation. The signals continued for 21 days until the transmitter batteries ran out on 26 October 1957.

By a fortuitous coincidence the trajectory of the satellite brought it over Ireland and many thousands of Irish people were able to witness the birth of the Space Age. The rocket booster used to launch the metal ball was visible high in the night sky as it orbited the Earth. People from Dublin drove up into the Dublin Mountains to see it more clearly away from the city lights and were not disappointed to see the distinct object as it made its way overhead – incl. Yours truly!

I remember it as a red dot high above  and indeed I had no idea what I was doing up in the mountains looking at the dark sky with my mother and uncle. I recall other people out of their cars doing the same thing. It was only many years later that I pieced it all together as to what this curious recollection buried in my childhood memories actually was.

So for once I can say I witnessed a major historical event and the birth of an Age: The Space Age!