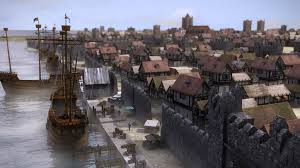 11 March 1597:A Huge explosion rocked the quays of Dublin on this day. On a dry and breezy Friday afternoon over 400 years ago the city of Dublin was rocked by the greatest and most deadly explosion ever recorded in its history. At least 126 people were killed and many hundreds more injured by this devastating eruption on the Quays.
The source of the explosion was the many barrels of gunpowder that had been unloaded at the Wood Quay on the south side of the River Liffey. Stored in the open they were awaiting transportation to Dublin Castle where they were to be distributed to the English Army in Ireland. A dangerous situation had arisen due to a labour dispute with the carters and porters whose job it was to move them off the docks. Basically they instituted as 'go slow' that week and with such an accumulation of barrels of powder the potential for a devastating outcome was greatly increased.
The barrels had to be landed by a lighter making its way up the Liffey as the shallow draught of the river back then made it difficult for merchant ships to sail up it. The lighter moored itself adjacent to the City Crane mounted on the Crane House. This was situated more or less where Winetavern St meets the Liffey Quays at Wood Quay.
On that fateful day the craneman was one Stephan Sedgarve. Just as the clock over the Bridge Gate struck the hour of one in the afternoon and as Sedgarve was manoeuvring the very last four barrels on to the Quay the whole thing went up and blew asunder the hapless craneman, the Crane House and some 20 other dwellings in the vicinity of the eruption. At least 126 people were killed and many hundreds more injured - a casualty list that would have been higher except for the hour of day when many of the Port's officials had departed for lunch and by the fact that most of the carters and porters were some distance off as they were reluctant to move the cargo until their dispute was resolved.

An Official Enquiry under the Lord Mayor Michael Chamberlain was set up to establish what exactly had caused the explosion but no satisfactory explanation was ever reached. There were reports of children rolling a barrel of gunpowder either in play or in theft or that a horse's hoof had let a spark amongst the deadly cargo. But with the immediate area a gaping crater in the ground and all that stood near dead or missing nothing could be said for sure:
Richard Toben, mr porter of Dublin, of the age of 55 yeares or thereabouts likewise sworne and duly examined deposeth, that he this depont being at the Crane, the daie and yeare aforesaid helping to put out the powder, and leaving eche barrell at the Crane dore readie to be carried awaie by suche as the Q. officers had apointed, the children of the streete and other persons there standing idle and not hired, fell a rowling of the powder; but who the children or persons were that so rowld them this depont. did not well note or knowe them.
He further deposeth that Thadie Carroll servant to John Allen, clarke of the Storehouse, was there put taking the note of the barrells, and Patrick Carroll the said Thadies brother was loading the same upon carrs, the owner of one of the carrs his name is Derbie Ferrall, and the owner of the other he knowetil not.
One hundred and forty-four barrels of powder were sent by the Queen to Dublin, to her people, in the month of March. When the powder was landed, it was drawn to Wine-street, and placed on both sides of the street, and a spark of fire got into the powder; but from whence that spark proceeded, whether from the heavens or from the earth beneath, is not known; howbeit, the barrels burst into one blazing flame and rapid conflagration which raised into the air, from their solid foundations and supporting posts, the stone mansions and wooden houses of the street, so that the long beam, the enormous stone, and the man in his corporal shape, were sent whirling into the air over the town by the explosion of this powerful powder; and it is impossible to enumerate, reckon, or describe the number of honourable persons, of tradesmen of every class, of women and maidens, and of the sons of gentlemen, who had come from all parts of Ireland to be educated in the city, that were destroyed. The quantity of gold, silver, or worldly property, that was destroyed, was no cause of lamentation, compared to the number of people who were injured and killed by that explosion. It was not Wine-street alone that was destroyed on this occasion, but the next quarter of the town to it.
Annals of the Four Masters
CELT: The online resource for Irish history, literature and politics