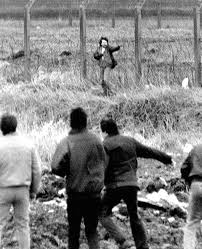 16 March 1988: The Milltown Cemetery attack in Belfast on this day. Dramatic and bloody scenes were witnessed by mourners in Milltown Cemetery as the thousands of attenders at the laying to rest of IRA volunteers came under attack by a lone gunman - Michael Stone.

On the 6th of that month the SAS had ambushed an IRA Active Service Unit on the British Colony of Gibraltar and shot them dead. They were unarmed and given no chance to surrender. They were Mairead Farrell, Sean Savage and Daniel McCann. When their bodies were released they were flown back to Dublin where thousands of people turned out in the pouring rain to pay their respects. A large funeral cortege accompanied the hearses as they began their journey north back to Belfast.

The attacks in Gibraltar drew worldwide publicity to what was happening in the North of Ireland and by the time the funerals were held journalists and cameramen were there in force to cover the proceedings. Usually what happened at Republican funerals was that the Crown Forces would swamp the event and harass and intimidate the mourners. However given that this would be a huge event with many thousands in attendance the British decided to draw back and observe from a distance. Word must have leaked though as the night before Stone was able to take his pick from a UDA arms dump in order to carry through on his plan to try and take out the senior Republicans likely to be present at the graveside - namely Gerry Adams and Martin McGuinness.

On the day of the funerals Stone made his way incognito into Milltown Cemetery and mingled with the crowd. He claims to have acted alone but some witnesses recall him in the company of other strangers before hand. Eventually he struck by lobbing a number of fragmentation grenades into the mourners before bolting.

But his attempt to flee was quickly spotted and he was chased by numerous men and youths determined to catch him. He turned and fired and brought down a number of them - some fatally. He eventually made it onto a nearby motorway but had run out of ammunition by that stage. He claims a car was to meet him there but there was none. He was caught, beaten and knocked unconscious. He was almost certainly a dead man but an RUC mobile patrol rescued him and he was carried away. Convicted and sentenced he was released under the terms of the Good Friday Agreement 1998 but again tried to attack his targets at Stormont some years later and was returned to jail.

Three people were killed while pursuing Stone: two Catholic civilians Thomas McErlean (20) and John Murray (26), and an IRA volunteer, Caoimhín Mac Brádaigh (30). During the attack about 60 people were wounded by bullets, grenade shrapnel and fragments of marble and stone from gravestones. Among those wounded was a pregnant mother of four, a 72-year-old grandmother and a ten-year-old boy.

While the North  was used to atrocities this one was filmed live by the World’s media and became Front page news. Anyone who witnessed it either there or on television is ever likely to forget it.