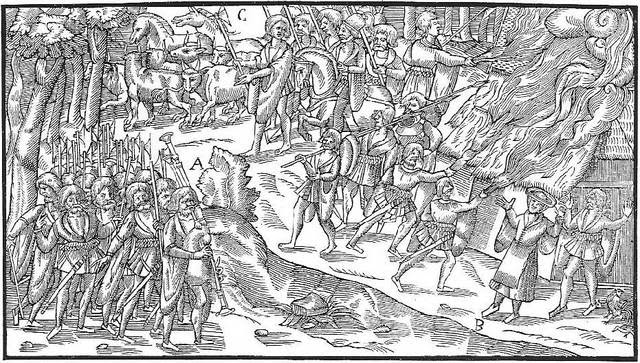 3 March 1577: The town of Naas, Co Kildare was torched by Rory Og O’More and Cormac MacCormac O’Connor on this day. These two Gaelic Chieftains with a select force of 140 men and boys ran through Naas like the ‘haggs and furies of hell, with flakes of fire fastened on poles’, and burned between 700 & 800 of the thatched houses belonging to the local townsfolk - who were still recovering from celebrating St David’s Day [1 March].

The English Lord Deputy Sydney was furious that Irish ‘rebels’ from the bogs of Laois were able to make such a surprise attack upon one of the chief towns of the Pale, cause such destruction in such a short space of time and then get clean away. He wrote that:

They had not one horseman, nor one shot with theim; they ran through the town, beinge open, like haggs and furies of hell, with flakes of fier fastened on pooles ends, and so fiered the low thatched howsies; and being a great windie night, one howse took fiere of another in a moment; they tarried not half an houre in the town, neither stoode they upon killinge or spoylinge of any.
There was above fyve hundred mennes boddies in the towne manlyke enough in appearance, but neither manfull, nor wakeful as it seamed; for they confesse they were all aslepe in their bedde, after they had filled themselves and surfeyted upon their patrone day; which day is celebrated, for the most part, of the people of this country birthe, with gluttonye and idollatrye as farre as they dare.

But Sydney was a cold and ruthless man. An insult to his authority like this could not be passed over. He was determined to bring in Rory O’More dead or alive. All that year and well into the next he harried his elusive opponent. He killed any of O’More’s soldiers he could engage in battle and also members of the O’More family - including Rory’s wife Margaret (O’Byrne). Finally in June 1578 O’More was killed in a skirmish, his head cut off and brought to the Lord Deputy who had it stuck on a pole on the walls of Dublin Castle.

Rury Oge, the son of Rury Caech, son of Connell O'More, fell by the hand of Brian Oge, son of Brian Mac Gillapatrick. This Rury was the head of the plunderers and insurgents of the men of Ireland in his time; and for a long time after his death no one was desirous to discharge one shot against the soldiers of the Crown.
Annals of the Four Masters