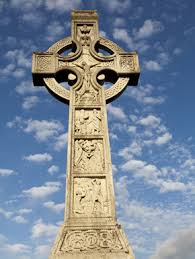 Gilla Mae Liac‭ [Gelasius], son of Ruaidhri, successor of Patrick, archbishop and primate of Ard-Macha and of all Ireland, son of chastity, full of purity of heart and of peace, died piously after choice old age, on the 6th of the Kalends of April [March 27], the Wednesday after Easter, in the 87th year of his age, the 37th of his episcopacy. That noble man was sixteen years full honourably in the abbacy of Columcille in Daire before [receiving] the succession of Patrick.
Annals of Ulster

Gelasius [Gilla Meic Liac mac Diarmata] was a reforming Archbishop who had been picked for the job by the great Saint Malachy himself to help bring the Church into line with the ecclesiastical Reform movement that was taking hold across western Europe. Before he gained the highest position in the Gaelic Church he was the Abbot of Derry for sixteen years. In 1158 he organised a Synod at Bri Meic Thaide in Mide (County Meath) that was attended by the Papal Legate Christianus and twenty five Bishops. They instituted ‘good rules and conduct’ for the further Reform of the Church but the details are now alas lost to us.