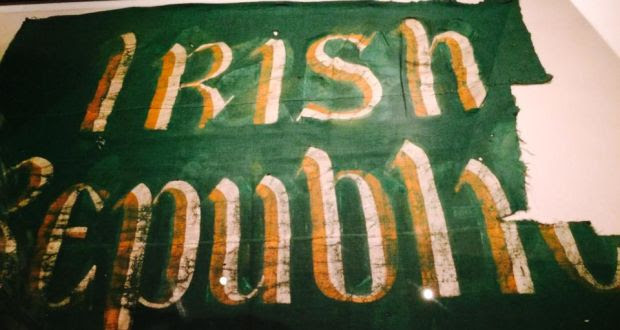 31 March 1966: The Insurgent Flag that flew over the General Post Office in Dublin in 1916 was handed back by the British Government of Harold Wilson on this day. It was made by Mary Shannon at the headquarters of the Irish Citizen Army in Liberty Hall and brought from there to the GPO where it was proudly hoisted above. It was inscribed with the words ‘Irish Republic’ in gold lettering on a Green background.

When the building fell to the British it was taken by British Officers who displayed it upside down at the foot of the Parnell Monument in Upper O’Connell Street, Dublin. This was the traditional way to display flags taken from enemy forces. Eventually it passed into the hands of the British museum authorities.

On the 50th Anniversary of the Rising in a gesture of conciliation the British Government under Prime Minister Harold Wilson decided to return the first flag of the Irish Republic to the Irish Government of the day under An Taoiseach Sean Lemass - himself a veteran of the Rising. It is now on display in the National Museum of Ireland in Dublin [above]. The flag was put together by Mrs Mary Shannon, a shirtmaker in the nationalist cooperative at Liberty Hall.

In a short letter written by the then Taoiseach, Mr Sean Lemass, to the British prime minister, Mr Harold Wilson, in 1966, the "gratitude and deep appreciation of the Irish Government and people" were expressed for the return to Ireland of the flag which flew over the GPO during Easter Week in 1916.

Mr Lemass, noting the support for its return from the Secretary of State for Commonwealth Relations, Mr Arthur Bottomley, and the members of the museum board, welcomed the British initiative, coming as it did shortly before the Rising's 50th anniversary.
He wrote from Government Buildings: "The return of the flag, can be welcomed as yet another step towards the building of goodwill and the most friendly relations between our two countries."
He thanked Mr Wilson for the "speed and the generosity with which your government responded favourably to our representations" for the return of the flag.
IRISH TIMES Jan 2, 1997