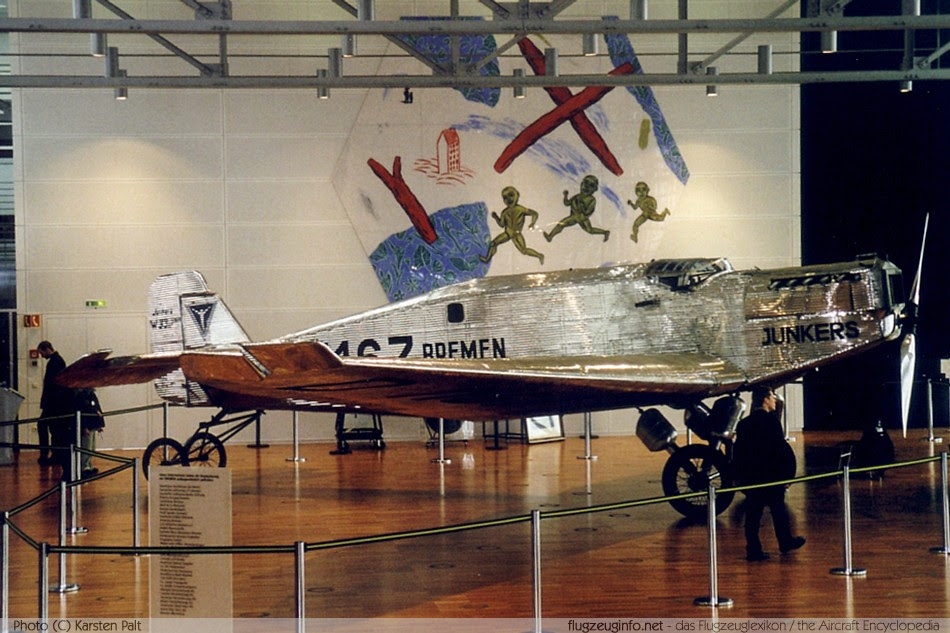 12/13 April 1928: The Bremen [above]  became the first aircraft to make the East – West crossing of the Atlantic. The crew was Colonel James Fitzmaurice, Captain Kohl (Pilot), and Baron von Heunfeld (Owner). They departed from Baldonnel Airfield outside Dublin City and then flew all the way non stop to Greenly Island, Newfoundland.

Fitzmaurice was chosen probably because of his experience and his position of Commanding Officer at Baldonnel. Von Heunefeld later wrote:

The welcome given to us by the Irish military and civil authorities was most hearty. We were made guests of the Irish Air Corps and soon it was settled between Koehl and me to invite Commandant Fitzmaurice to accompany us as second pilot on our flight to North America. And so our 'German-Irish Crew' as we came to call it was formed and none of us ever regretted the pact which proved itself so trustworthy in the course of extreme danger.

The aircraft to be used was a Junkers W.33 named Bremen. It carried 520 gallons of petrol, enough for forty-four hours in the air. Fully loaded the plane weighed 5 tons.

Fitzmaurice took every opportunity to acquaint himself with the Bremen and many trial runs were undertaken. The big take-off was delayed because of bad weather but following a favourable North Atlantic weather report Thursday 12th April was set as the date for the Bremen's departure. When news of the intended departure got out, thousands of people made their way from Dublin out to Baldonnel to wish the flyers well and to see the historic take-off.

Michael Burgess, a Garda on duty there that day recalled that the crowd were "very excited but well behaved, many of them had Rosary beads, and some of them were shaking holy water at the plane and its crew. The huge crowd of sightseers cheered as the Bremen took off for their unintended destination of Newfoundland.

There they had to make a forced landing after a flight of 2,300 miles in just over 36 hours. Though they made a perfect landing it proved impossible to restart the plane due to propeller damage and the fact that it had landed on a thin crust of ice on a on a shallow, ice-covered, water reservoir.
They enjoyed a hero’s welcome in the USA & Canada and undertook a two month tour across North America before returning across the Atlantic by ship, landing at Bremen. There they under took more engagements and in July the three flyers came back to Ireland where the names of the three flyers were added to the "Roll of the Honorary Freedom of the City of Dublin".

James Fitzmaurice was born in Dublin on January 6th, 1898. His father was a prison officer and the family moved to Portlaoise when James was five years old. His nickname was 'Fitz'. While growing up, he became interested in the idea of flight and he spent a lot of time in Aldritt's garage trying to build an airplane. His first attempt crash-landed in a field. He joined the British Army and fought in the Battle of the Somme in World War I. He then joined the RAF but resigned in 1921 to take up a position in the Irish Free State’s Air Corps. He eventually became its Officer-in-command before he was offered the chance of a Lifetime to partake in this historic flight.

The flight of the Bremen across the Atlantic Ocean remains one of the greatest feats in Aviation History.
http://www.askaboutireland.ie/readin...st-to-west-tr/