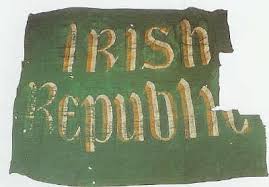 25‭ ‬April‭ ‬1916:‭ ‬A statement was issued from the Insurgent HQ in the GPO Dublin on this day.

THE PROVISIONAL GOVERNMENT To The CITIZENS OF DUBLIN
The Provisional Government of the Irish Republic salutes the Citizens of Dublin on the momentous occasion of the proclamation of a SOVEREIGN INDEPENDENT IRISH STATE,‭ now in course of being established by Irishmen in arms.
The Republican forces hold the lines taken up at twelve noon on Easter Monday,‭ ‬and nowhere,‭ despite fierce and almost continuous attacks of the British troops, have the lines been broken through. The country is rising in answer to Dublin’s call, and the final achievement of Ireland’s freedom is now, with God’s help, only a matter of days. The valour, self-sacrifice and discipline of Irish men and women are about to win for our country a glorious place among the nations.
Ireland’s honour has already been redeemed‭; it remains to vindicate her wisdom and her self-control. ‬All citizens of Dublin who believe in the right of their country to be free will give their allegiance and their loyal help to the Irish Republic...
Signed on behalf of the Provisional Government,‭ ‬P. H. PEARSE, Commanding in Chief of the Forces of the Irish Republic, and President of the Provisional Government.

Meanwhile the British continued their preparations to crush the Rising.‭ Lord French, the Commander of the British Army in Britain organised for an Expeditionary Force to be immediately despatched to Ireland. Within the Country General Lowe sent reinforcements from the Curragh to Dublin by train. More arrived from Belfast to bolster their positions. The General decided to seal off and isolate the various strongpoints and await further reinforcements. He established a tightening cordon in the outskirts of the City to stop any further support reaching the Volunteers and to guard against any breakout.

About‭ ‬100 or so British soldiers seized the Shelbourne Hotel overlooking St Stephens Green and forced the Irish Citizen Army to withdraw under fire to the adjacent College of Surgeons. Commandant Daly who had seized the Linen Hall Barracks in north central Dublin set it alight to stop the British from using it as a base of attack.