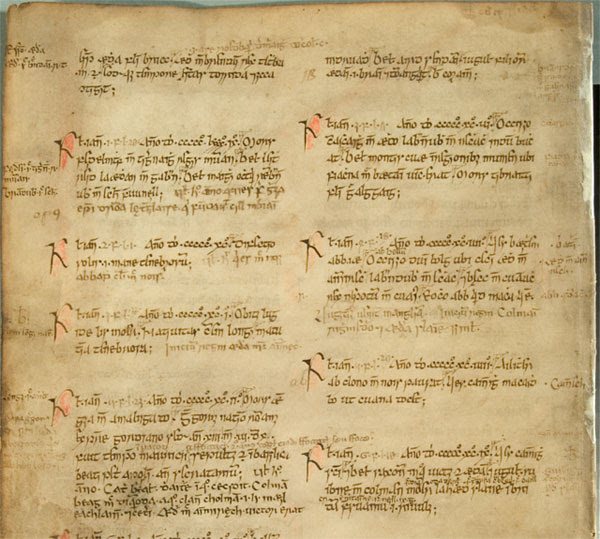 1‭ April 1129 AD: The death of Cellach mac Aeda on this day. This famed and holy man was the Bishop of Armagh. His status as head of the Irish Church had been recognised at the Synod of Rathbressail/Ráth Breasail  in the year 1111. It marked an important step in the transition of the Irish Church from a monastic to a diocesan and parish based church. Many Irish present day dioceses trace their boundaries to decisions made at the synod. Cellach was born in the year 1080 and was an advocate of reform in the Irish Church to put it on a more formal footing and along set lines that matched similar moves on the Continent.

While on a visit to Munster‭ (‬Mumu) he took ill and died at the religious settlement of Ard Patrick near Limerick. He was buried at his own request at Lismore. Shortly before he died he designated the future Saint Malachy as his successor. However his protégé was to be frustrated in his attempts to secure the see of Armagh by Muirchertach mac Domnall who installed himself at Armagh before Malachy could get there. The situation was only resolved in 1134 after much political and ecclesiastical power politics had been played out.

We see in his ‘Obituary’ in the Annals of Ulster [sample above] an eulogy that sets out the kind of person a great ecclesiastic was expected to be:

Cellach,‭ ‬successor of Patrick, a virgin and the chief bishop of western Europe, and the only head whom Irish and foreigners, lay and clergy, obeyed, having ordained bishops and priests and all kinds of cleric also, and having consecrated many churches and churchyards, having bestowed goods and valuables, having exhorted all, both laity and clergy, to uprightness and good conduct, after a life of saying the hours, saying mass, fasting, prayer, after being anointed and having made excellent repentance, sent forth his soul to the bosom of angels and archangels in Ard Pátraic in Mumu on Monday, the Kalends 1st of April, the twenty-fourth year of his abbacy and the fiftieth year of his age.
His body was brought on the third of the Nones‭  [3rd of April]  to Lis Mór of Mo-Chutu in accordance with his own testament, and was waked with psalms and hymns and canticles, and buried with honour in the burial-ground of the bishops, on the day before the nones 4th of April, that is, Thursday. Muirchertach son of Domnall was appointed to the successorship of Patrick on the Nones 5th of April.
Annals of Ulster‭