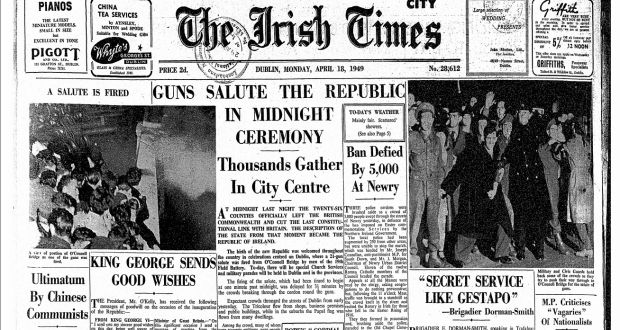 18 April 1949:The Republic of Ireland Act 1948 came into operation on this day. It separated the 26 County State [The Irish Free State] from the British Commonwealth and made her an Independent Republic in her own right. This momentous decision was taken some months earlier by the Coalition Government of An Taoiseach John A Costello.  During his presence at a Conference in Ottawa, Canada he was miffed at his reception where he felt he had been deliberately embarrassed by the host the Governor General of Canada -Earl Alexander - himself of Ulster descent and one of Britain’s foremost Military Commanders of WWII.

However the move had been under consideration for years [indeed the Government Parties had campaigned on this issue at the previous general election] and it became more plausible following the Declarations of the newly independent India, Pakistan and Ceylon as Republics in 1947. While they chose to remain within the Commonwealth the broad consensus at home was to get out. De Valera had stripped the ties between the State and the British Crown down to the bare minimum back in 1936 but he was reluctant to press any further ahead than that. In a way only a non FF led Government could have been sure to have carried the People with them across the board to see it through - after all De Valera could hardly object!

In Dublin, tricolours flew from buildings – private and public – while papal flags adorned houses in the suburbs. The GPO was decked out in a green, white and orange plastic material.
“As the time for the firing approached, a solid mass of people jammed the thoroughfare from O’Connell Bridge to the GPO Every possible vantage point was made use of,” reads the report.
From the city, blazing tar barrels could be seen on the Dublin hills. At 11.45pm, O’Connell Street “became a blaze of light from searchlight batteries ringing the city.” A few minutes after midnight the salute from the guns began, with 10-second intervals between the rounds.
...later in the morning, following a military parade, the president Sean T O’Kelly addressed the media at the GPO. “We now stand alone, as a nation on our own,” he said, adding: “We are making a big noise in the world, and we will make a bigger noise still. We can be of great assistance if we can only get rid of partition, the one and last worry we have.”
Irish Times 18 April 2019

Thus it came about that on the strike of midnight on 17/18 April 1949 the State was legally a Republic at last - though minus the Six Counties of the North which robbed it in some eyes of full legitimacy. However the status of the State as a Independent Republic has now survived 70 years even if greatly modified in its powers and remit through membership of the European Union since 1973.
Posted by Columba Iona at 10:27