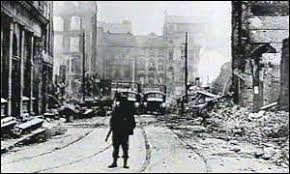 15/16 April 1941: The Luftwaffe Bombed Belfast on this night. The city’s first major attack of War was on Easter Tuesday night, 15-16 April. An estimated 180 aircraft participated in the assault, which lasted for five and a half hours (11:30 pm–4:55 am). Bombs fell on average at a rate of two per minute. There was virtually no resistance from the ground. Due to blast damage to the city’s telephone exchange the anti-aircraft guns fell silent from 1:45 am onwards. By the time of the “all clear” it had to be rung by hand-bells because of a power failure.

Belfast was only lightly defended by AA guns as both Stormont and Westminster did not believe that the Luftwaffe would take much interest in Belfast as it was too far away from German Air bases and there were more lucrative targets in Britain for them to bomb.

In the time between the start of the war in September 1939 to the first bombing in April 1941, Belfast had experienced 22 air raid siren alerts – each one a false alert. This cultivated an atmosphere of carelessness among many and this extended to things such as blackouts – strictly enforced on the mainland. “People were careless about their light.” (Jimmy Wilton, Belfast ARP).
https://www.historylearningsite.co.uk/

However the city was a major shipbuilding centre and a major port and that attracted attention with probing raids that should have shook both politicians, the populace and the Military  out of their  complacency. When this major raid did go ahead it stunned everyone in its intensity and the death and destruction it brought down on the City.

An Observer from Dublin, Major Sean O’Sullivan noted that:
In the Antrim Road [North Belfast] and vicinity the attack was of a particularly concentrated character and in many instances bombs from successive waves of bombers fell within 15-20 yards of one another … In this general area, scores of houses were completely wrecked, either by explosion, fire or blast, while hundreds were damaged so badly as to be uninhabitable … In suburban areas, many were allowed to burn themselves out and during the day wooden beams were still burning … During the night of 16-17, many of these smouldering fires broke out afresh and fire appliances could be heard passing throughout the night…

The Air Raid killed some 745 people, injured 1,500 and destroyed about 1,600 houses with many more damaged to a greater or lesser extent. It was the bloodiest day of violence in Modern Irish History.