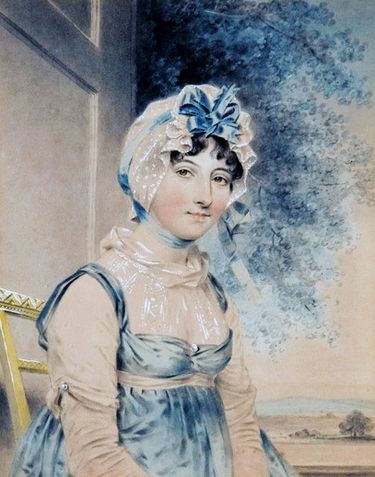 22 May 1849: Maria Edgeworth died on this day. She was born in England in 1767 and spent her early years there. Her mother died while she was quite young and she was raised by a series of step mothers. (Her father married four times and sired 22 children!). Unusual for the Age for a female she was sent to school where she excelled at her studies. However in 1782 she accompanied her father, his third wife and a number of children to Edgeworthstown, Co. Longford. It was here that she made her home for the rest of her Life.

An intelligent and curious woman she corresponded with famous and learned people across these islands, though in her heart she wanted to be a writer and with her material needs provided by her father and her social isolation on his Estate she began to pour out a succession of publications. She served as her father's secretary as well, and collaborated with him on several nonfiction works. She also helped to raise many of the numerous brood of his offspring.

Her first work was Letters for Literary Ladies (1795), and this owed much her fathers’ ideas on women's education. It was followed by The Parent's Assistant (1796), a collection of children's stories, and their jointly written Practical Education (1798). More children's stories were published in 1801 as Early Lessons and Moral Tales. Her first and best novel, Castle Rackrent (1800), was published anonymously. It achieved immediate success, and her name appeared on subsequent editions. Indeed her reputation today more less rests on this work and its portrayal of Irish life at that time.

Castle Rackrent is also recognized as the first regional novel, depicting the speech, mannerisms, and activities of a specific Irish region and social class. This technique influenced subsequent novelists, including William Thackeray, James Fenimore Cooper, and Sir Walter Scott, who commended "the rich humour, pathetic tenderness, and admirable tact" of Edgeworth's novel and expressed the hope that his own novels would accomplish for Scotland "something . . . of the same kind with that which Miss Edgeworth so fortunately achieved for Ireland".

In 1802 the Edgeworths toured the English midlands. They then travelled to the continent, first to Brussels and then to France when a brief Peace operated  between Britain and Napoleonic France.  They met all the notables, and Maria received a marriage proposal from a Swedish courtier, Count Edelcrantz- but it appears she wasn’t very interested in him.

On a visit to London in 1813, where she was received as a literary lion, Maria met Lord Byron (whom she disliked). She entered into a long correspondence with the ultra-Tory Sir Walter Scott and they formed a lasting friendship. She visited him at his home in Scotland at in 1823 where he took her on a tour of the area.

After her father's death in 1817 she edited his memoirs, and extended them with her biographical comments. She was an active writer to the last. She was might be perhaps described as a mild unionist who believed in fair treatment for all but not in the separation of England and Ireland. She was a strong believer in Woman’s Rights and Children's’ Rights.

After a visit to see her relations in Trim, Maria, now in her eighties, began to feel heart pains and died suddenly of a heart attack in Edgeworthstown on 22 May 1849. She was buried in the family vault there alongside her father.
* Portrait of Maria Edgeworth by John Downman 1807