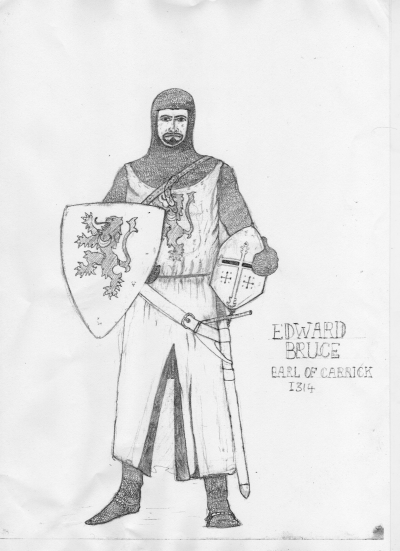 26 May 1315: Edward de Bruce the Earl of Carrick (the younger brother of Robert de Bruce of Scotland) and his fleet landed on the Irish coast on points at and between Olderfleet Castle at Larne and Glendrum on the north east coast of Ireland. The Earl's army contained a force estimated at in excess of 6,000 men, many of them veterans of the campaign of the previous year in Scotland in which the Earl Edward led the vanguard at the Battle of Bannockburn where he and his brother decisively defeated the King of England Edward II.

His descent on the north-west coast of Ireland was the start of his ultimately futile bid to seize Ireland from the English – an attempt that was to cause much bloodshed and suffering here for three long years.

Edward knew there was much dissatisfaction with English Rule in Ireland. He had helped his brother fight the Sassenach in Scotland and defeat their attempts to secure that Kingdom. But he was also a man of ambition and pride. He did not want to spend his life in his brother's shadow. King Robert in turn did not want his ambitious sibling as a thorn in his side either. He steered his brothers’ focus onto freeing the Gaels of Ireland from English Rule. If Edward could achieve that then Robert would be shot of him and would have also diverted the attentions of King Edward II of England away from Scotland and onto Ireland.

Then in the late summer of 1318, Sir John de Bermingham with his army began a march against Edward de Brus. On 14 October 1318, the Scots-Irish army was badly defeated at the Battle of Faughart by de Bermingham's forces. Edward was killed, his body being quartered and sent to various towns in Ireland, and his head being delivered to King Edward II. The Annals of Ulster summed up the hostile feeling held by many among the Anglo-Irish and Irish alike of Edward de Brus:

Edward de Brus, the destroyer of Ireland in general, both Foreigners and Gaels, was killed by the Foreigners of Ireland by dint of fighting at Dun-Delgan. And there were killed in his company Mac Ruaidhri, king of Insi-Gall Hebrides [i.e. Ailean mac Ruaidhri] and Mac Domhnaill, king of Argyll, together with slaughter of the Men of Scotland around him. And there was not done from the beginning of the world a deed that was better for the Men of Ireland than that deed. For there came death and loss of people during his time in all Ireland in general for the space of three years and a half and people undoubtedly used to eat each other throughout Ireland."
The Annals of Ulster