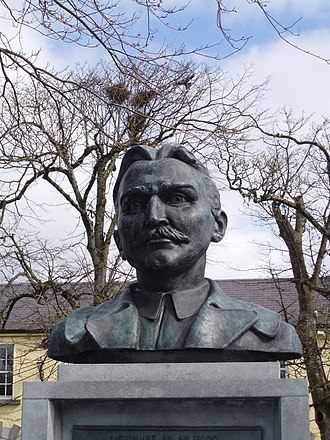 5 May 1916: Major John MacBride was executed on this day. Originally from Mayo he travelled to America in 1896 to further the aims of the I. R. B., thereafter travelling to South Africa where he raised the Irish Transvaal Brigade during the Second Boer War where he saw action against the British Army. When the Brigade was disbanded he made his was to Paris. MacBride married the Irish nationalist Maude Gonne in 1903 but it was not a success . They had one son the late Sean McBride Human Rights campaigner and winner of the Nobel & Lenin Peace prizes.

The 1911 return for John MacBride recorded him living as a boarder in a house in Kingstown, (or Dún Laoghaire), Co. Dublin. His occupation was a Dublin City water bailiff. The Major was not a member of the Irish Volunteers and was not privy to plans for a Rising. However  being in Dublin on Easter Monday in order to meet his brother at the Wicklow Hotel off Grafton St (his brother was due to be married on the Wednesday) he had arrived early and decided to stroll up to Stephen’s Green to kill some time. There he ran into Thomas McDonagh one of the Leaders of the revolt and an old comrade, where he was informed what the commotion going on was all about and he immediatedly offered his services to the insurgents.

He was at Jacob’s biscuit factory when that post was surrendered on Sunday, 30 April 1916. He freely admitted his part in the Rising and that he fought in Mufti. It looks like he did  not initially expect to be shot but when he realised that was the most likely outcome he accepted it with equanimity. At his execution he asked not to have his hands tied behind his back, but this was refused. When they did cover his eyes he made a similar request, remarking to the priest: “You know, father, I have often looked down their guns before.”