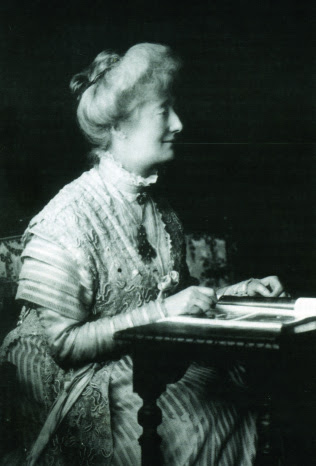 28 May 1929: The death of the Irish Historian Alice Stopford Green on this day. Her father was the Rector of Kells  Co Meath where she was born in 1847. Despite the terrible conditions in the Country at the time Alice was raised in some comfort and educated herself through the use of her fathers extensive Library in Greek, German and metaphysics. At about the age of sixteen she was attacked by an eye ailment, rendering her temporarily blind. In 1873 her family moved to Dublin and there, hungry for knowledge, she started to attend lectures in physics at the College of Sciences.

After her father’s death she moved with her mother and sisters to London, where she was noticed by an emerging Oxford historian, John Richard Green. In 1877 they were married. He made his name through the publication of a work called A short history of the English people which sold well. She acted as his secretary and assistant and things seemed to be going well. However in 1883 her husband suddenly died and she was on her own. Undeterred she set out to make a name for herself as an Historian in her own right and as a Woman of Letters. She had a formidable list of correspondents in the English speaking World. Her early works—a life of Henry II and a long two-volume study of Town life in the fifteenth century—confirmed her abilities as someone capable of producing serious works of History.

Though mildly interested in Irish affairs she resided in London and took a keen interest in Africa. Green found her niche editing the ‘Journal of the African Society’, which she did until 1906 and was of the opinion that Black Africans had their own cultures and traditions that should be highlighted and respected. The Boer War was something of a catalyst in how she viewed the Empire and she visited the prison camp on the island of St Helena where Boer prisoners-of-war were being held. In October 1900, returning to England aboard a steamship, she wrote to John Holt: I am certain if this Empire is to be held together at all that Englishmen will have to think more of knowledge v intelligence, & trust less to the argument.

With the growth of the Irish Revival at home and a renewed interest in Old Irish History she set about the study of it. Much influenced by her late husband’s focus on social and economic aspects of historical change she came out in 1908 with her seminal work The Making of Ireland and its Undoing 1200-1600. This was a bit of a shocker in the stuffy world of Irish Historiography and it seems ruffled quite a few feathers! But it did establish her as a prominent Irish historian as opposed to a British one.

With the growth of the Home Rule Crises in 1912 and the arming of the Northern Loyalists she became convinced that Nationalist Ireland had to reciprocate and helped along with Sir Roger Casement and others to land guns in Ireland to counter any attempt to Partition the Country. However it was only in 1918 that she moved to Dublin where she took up residence at 30 St Stephen’s Green where her house became a hub of social and political interaction. While she was an Irish historian and patriot she was not one of violent persuasion.

When the Treaty was signed in 1921 she fully supported it. In 1922 she won a seat in Seanad Éireann  as a Senator of the new Irish Free State. She remained as a member until her death. Her final major work was History of the Irish State to 1014. Again in this volume she attempted to lay out the cultural, social and legal framework of Ireland and the National character and culture of the People up until that date and steered away from a political history of the period.

Alice Stopford Green died on this day in 1929 - just two days short of her 82nd birthday. She is buried in Deans Grange cemetery Co Dublin.