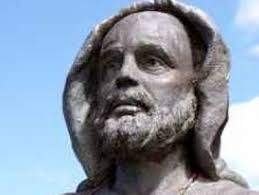 1 March 560 AD: St. Senan traditionally died on this day. Bishop and confessor. He was born at Magh Lacha, near Kilrush, Co. Clare circa 488 AD.  His parents were called Erean and Comgella.
St Senan is considered one of the ‘Twelve Apostles of Ireland’ part of an elite group of Holy Scholars who studied under the guidance of St Finnian at his Monastery at Clonard, Co Meath. He commenced his missionary career by founding a church near Enniscorthy, in around 510 and the parish is still known as Templeshannon/Tempeal Senan. He then visited Menevia, Rome and Tours before returning to Ireland.

He founded a number of Monasteries but his most famous was on an island not far from the place of his Birth. This was on Iniscathaigh, today know as Scattery Island in the Estuary of the River Shannon. Here many Holy men and devotees came to visit him but no women – for the Saint made a strict point that no member of the fairer sex could set foot on the island. It is reputed that even his own sister, herself a saintly woman, was allowed to disembark there. To honour her dying wish to be buried near her beloved brother St Senan on her death had her body brought out on a boat near the island. When the tide was low he had her mortal remains buried beneath the tidal mud so that the spirit if not the letter of her last earthly desire was met.

St Senan though was not against womanhood but believed in the rule of celibacy being strictly followed. He was patron to nunneries as well which he visited. It was while returning from one such visit on 1 March 560 AD that he suddenly took ill in a field outside the nuns church. Knowing his end was near, he raised his hands in thanksgiving to God, and telling his companions that his hour had come to depart from them, he bade them on his death to convey his body to Iniscathaigh.