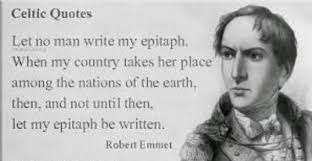 4‭ ‬March‭ ‬1778: Robert Emmet was born in Dublin on this day. He was the youngest son of Dr Robert Emmet and Elizabeth (Mason). His father was a well to do Physician in the City with  a house on St Stephens Green and another one down the Country. His elder brother Thomas Addis Emmet was a personal friend of Wolfe Tone who visited the family home on many occasions.

[Robert Emmet] was born in Molesworth-street, Dublin, in 1778. Shortly after his birth his father removed to 109 Stephen's-green West (corner of Lamb-lane). There, and at Casino, his father's country place near Milltown, his early years were passed. He was sent to Oswald's school, in Dopping's-court, off Golden-lane; subsequently he was removed to Samuel White's seminary in Grafton-street; and was afterwards put under the care of Rev. Mr. Lewis, of Camden-street. On 7th October 1793 he entered Trinity College. His college course, like his brother's, was brilliant. He exhibited great aptitude for the exact sciences, especially mathematics and chemistry.
http://www.libraryireland.com/biography/RobertEmmet.php

When he entered Trinity College in‭ ‬1793 and joined the College Historical Society, a debating society. He became secretary to the United Irish Society in the college, but had abandon his studies in April 1798 when he and a number of students were expelled for their Republican sympathies. In 1799 he travelled to France to escape arrest and to secure support for another Rising in Ireland.

He returned home in late‭ 1802 after the Peace of Amiens between Britain & France and began to lay plans to seize Dublin from the British. Unfortunately his plans were laid open by a premature explosion of his arsenal in July of the following year. He then banked all his hopes on an immediate eruption on 23 July but his venture quickly fell apart and he want into hiding. A few weeks later he was captured, tried for ‘Treason’ and gave the speech of his Life before the Court that quickly became a sensation and secured his reputation as a Patriot.

My country was my idol.‭ ‬To it I sacrificed every selfish, every endearing sentiment, and for it I now offer up myself … I acted as an Irishman, determined on delivering my country from the yoke of a foreign and unrelenting tyranny and the more galling yoke of a domestic faction, which is its joint partner and perpetrator in the patricide…
Delivered at the Session House in Dublin before the court which had convicted him of high treason, September 19, 1803.

He was sentenced to be hung,‭ drawn and quartered. This was duly carried out on 20 September before a large crowd in Thomas Street Dublin. The whereabouts of his body today remains a mystery.