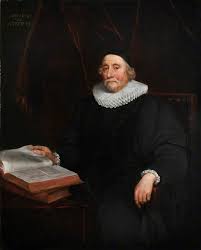 21 March 1656 AD. The death of James Ussher, the protestant Archbishop of Armagh on this day. James Ussher was one of the most influential people in these islands in the early and middle years of the 17th century. He was born in Dublin in 1581 to an Old English family.

Although his father was a Protestant and his mother a Catholic he was raised in the new religion. His family were well connected with his uncle Henry being Archbishop of Armagh from 1595. James was a scholarly child and entered Trinity College at the age of 13. He followed a career into the church of his father.

He received his Bachelor of Arts degree by 1598, and was a fellow and MA by 1600 In May 1602, he was ordained in the Trinity College Chapel as a deacon by his uncle Henry Ussher, the Archbishop of Armagh and Primate of All Ireland. Ussher went on to become Chancellor of St Patricks Cathedral in Dublin in 1605. He became Professor of Theological Controversies at Trinity College and a Bachelor of Divinity in 1607, Doctor of Divinity in 1612, and then Vice Chancellor in 1615 and vice-provost in 1616. In 1613, he married Phoebe, daughter of a previous Vice Provost, Luke Challoner, and published his first work. In 1615, he was closely involved with the drawing up of the first Confession of Faith of the Church of Ireland. This document carved out a separate and distinct identity for the Protestant Church in Ireland.

Ussher was a convinced Calvinist and viewed with dismay the possibility that people he regarded as anti-Christian papists might achieve any sort of power. He called a secret meeting of the Irish bishops in his house in November 1626, the result being the "Judgement of the Arch-Bishops and Bishops of Ireland". This begins:
The religion of the papists is superstitious and idolatrous; their faith and doctrine erroneous and heretical; their church in respect of both, apostatical; to give them therefore a toleration, or to consent that they may freely exercise their religion, and profess their faith and doctrine, is a grievous sin.
The Judgement was not published until it was read out at the end of a series of sermons against the Graces given at Dublin in April 1627.

In 1631, he produced a new edition of a work first published in 1622, his "Discourse on the Religion Anciently Professed by the Irish", a ground-breaking study of the early Irish Church which sought to demonstrate how it differed from Rome and was, instead, much closer to the later Protestant church. This was to prove highly influential, establishing the idea that the Church of Ireland was the true successor of the early Celtic church — a belief that persists in some Protestant circles to the present day.

In 1640 he had left Ireland for good and though he continued to live an active life in England during the years of the Civil Wars he remained loyal to King Charles as long as he could. He witnessed the execution of the King on 30 January 1649 but reputedly fainted before the axe fell!

Today though Ussher is best remembered for his claim that the World was created in the year 4004 BC. He came to this conclusion by a close study of Biblical Texts and other Ancient writings. At the time this was considered to be ground breaking work that put Ussher at the top end of Biblical scholars.