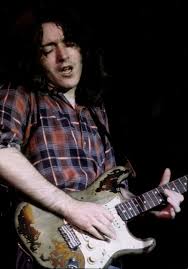 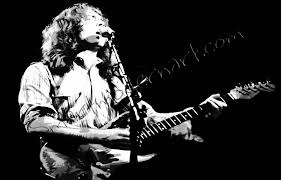 2 March 1948: Rory Gallagher was born on this day in Ballyshannon Co Donegal. Rory was a pioneer for Irish Rock in the 1970s and 1980s who toured all over the World with his own unique take of Rock songs and ballads. He built up a dedicated group of admiring fans who were stunned by his brilliant riffs and his stage presence. Compared to the Super Groups that were around even then he kept it tight with just himself on vocals and lead guitar & Gerry McAvoy on bass guitar; they had a succession of drummers such as Rod De’Ath. Wilgar Campbell, Ted McKenna and Brendan O’Neill, along with the late Lou Martin on keyboards.

His love of music dated back to the early days of his childhood in Cork City. He purchased his trademark Fender Stratocaster Sunburst model in 1963, from Michael Crowley of Crowleys Music Store at the age of fifteen. Heavily influenced by US Rock n’ Roll, Blues and Soul as well as folk ballads it was a style he kept with him throughout his career. He cut his teeth with the Irish Showbands of the 1960s and got used to touring and life on the road. But he was not made to stop there and in 1968 he put together his own Band - ‘Taste’ - that made a name for himself and gave Irish Rock a much bigger profile. However it was a short lived affair and after a stunning performance at the Isle of White in 1970 they split up.

He formed his own band the following year and went on the road. He never really stopped after that. In 1972, Rory Gallagher topped the Melody Maker Guitarist of the Year Poll, ahead of contemporaries such as Eric Clapton, Jimmy Page and Jimi Hendrix.

Gallaghers’ dexterity on a wide variety of instruments and his prowess as a unique electric and acoustic guitarist is defined by his considerable recorded output, and the critical acclaim his work has received over the decades both prior to and since his demise....His outstanding performances were best captured on film specifically by acclaimed film maker Tony Palmer in Irish Tour 1974, capturing Rory and the band in full flight, in what many of his fans considered to be his golden era.Marcus Connaughton
https://www.rte.ie/culture/2018/0302/944564-rory-gallagher-rocks-celebrating-his-life-and-legacy/

Rory always kept true to his own take on what Rock Music was and where you could take it - he eschewed any attempt to be ‘popular’ just for the sake of it. He demanded the best from himself and those around him and was really at a loss when not touring or recording. He never really could adjust to ‘normal’ life. It was a two edged sword though as constant touring took its toll on him and he developed addictions that meant his health was up and down over the years.

By the time he died in a London Hospital in 1995 at the age of 47 due to post operative complications from a liver transplant he had sold over 30 million albums and was a firmly established icon in not just Irish circles but on the International circuit too. Curiously though he has never been inducted into the Rock and Roll Hall of Fame - a glaring error if ever there was one!