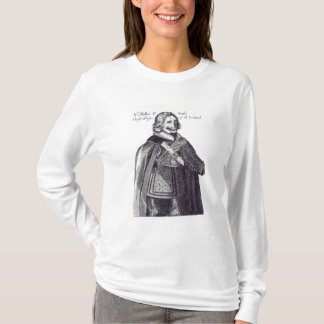 10 March‭ ‬1653: Sir Phelim O'Neill was hanged, drawn and quartered at Dublin on this day. Sir Phelim was a wanted man from the day back in October 1641 when he led the Irish of Ulster out in revolt against the English Parliament. He was a most unlikely ‘Rebel’ for his family had sided with the English during the Nine Years War (1594-1603) and again during O’Doherty’s Rebellion in 1608 in which his own father was killed in the service of King James I.

O’Neill in turn had openly adapted to the new dispensation,‭ ‬studied Law in London and on return had settled down to the life of a powerful if spendthrift landlord in Tyrone. But by the early 1640’s the situation both in Britain and Ireland was rapidly spinning out of control as King Charles personal rule fell apart and the Puritans rose in power. O’Neill amongst others recognised that these people sought to further colonise Ireland and suppress the Catholic Religion.

On the night of 22 October 1641 he opened the Revolt by seizing Charlemont Fort in Tyrone. Two days later, O'Neill issued a proclamation declaring that he and his associates had taken up arms only for the defence and liberty of themselves and the native Irish; the insurgency was not intended to harm either King Charles or any of his subjects in Ireland. In a brilliant move he had forged a commission early in November 1641, purporting to bear the King’s Seal and which authorised the Irish to rise in defence of their liberties against the Westminster Parliament.

Sir Phelim had mixed success in the years that followed,‭ ‬never quite getting the better of his enemies, and never quite securing command of the Irish of Ulster. His initial success was marred by an outbreak of vicious massacres and ‘ethnic cleansings’ of Protestant settlers that was greatly exaggerated but widely believed in Scotland and England. While O’Neill stood aloof he was blamed nonetheless by the Puritans and they were determined to execute him if he was ever taken alive.

He commanded a Regiment at the great Irish Victory of Benburb in‭ 1646 but had to flee the field at Scariffhollis in 1650. He tried to defend Charlemont Fort against the English Parliamentary army in August 1650 but was forced to flee and go into hiding as the Cromwellians tightened their grip on Ireland. They put a price of £300 on his head and in February 1653 his hiding place on an island in Lough Roughan in County Tyrone was betrayed and he was captured. Brought to Dublin he was imprisoned to await Trial but he must have known he was doomed to the gallows.

He was tried by the Cromwellian‭ ‘‬High Court’ sitting in Dublin which was specifically charged with executing as many of the ringleaders of the 1641 Rising as they could. The trial was held at the Court of Chancery in Dublin. Here the Judges sat, and were directed what questions they should allow by a Committee, who placed themselves in an adjoining room, called the Chancery Chamber. A communication was kept up between this Committee and the Judges by means of a messenger, who went constantly between them, relating to the Committee all proceedings that passed in the Court, and bringing their instructions to the Judges on every occasion, speaking to them through a square hole in the wall. His examiners were most anxious to know whether his Great Seal from the King was genuine or a forgery. O’Neill would not pleasure them with an answer even though they insinuated that his life could be spared if he answered in the affirmative.

After a trial of just five days Sir Phelim O'Neill was found guilty and sentenced to be hung drawn and quartered. The execution was duly carried out and his head was fixed on the bridge at Dublin, and his quarters were scattered throughout different parts of Ireland.

While not a commanding figure,‭ fate had placed Sir Phelim in a pivotal position in the Autumn of 1641 where his actions triggered a series of events that were to have profound effects across the Three Kingdoms of these islands that still resonate down to the present day.