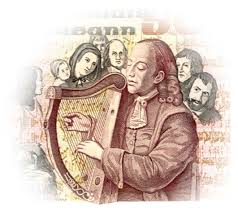 25‭ ‬March 1738: The death of the Harpist Turlough O'Carolan/ Toirdhealbhach Ó Cearbhalláin on this day. He was the most famous Irish musician and player of his day who plied his trade throughout Ireland. He was born in 1670 at Nobber, Co Meath and from an early age trained to become a player of the harp. However at the age of 18 he caught the smallpox and was left Blind. Nevertheless he continued his love of the instrument and mastered his disability. Due to the generosity of a patron, Mrs. MacDermott, he was able to equip himself for the road with a harp, a horse, a guide, and the money to launch a career as an itinerant harper, playing for patrons throughout the Irish countryside.

Various sources say that he was cheerful and gregarious,‭ ‬enjoyed ludicrous stories,‭ ‬practical jokes and he was an excellent backgammon player. As with many harpers of the time, he also drank a great deal, and he had a temper to be avoided. He developed his natural musical talent and talent and turned his hand to composition, penning over 220 works of Irish music many of which are still recorded and played today. In his travels around the Country he stayed at the Houses of various Patrons, both native and planter and his influences were drawn not just from Ireland but also further afield.

He eventually married a woman called Mary Maguire,‭ they lived on a farm near Mohill, Co. Leitrim and had seven children. ‬Mary died in 1733 and just five years later, feeling ill, Carolan returned to the home of his original Patron Mrs. MacDermott Roe. After several days, he called for a drink and repeated these lines to his first patron:

Mary Fitzgerald,‭ dear heart,Tusk
Love of my breast and my friend,‭
Alas that I am parting from you,‭
O lady who succoured me at every stage.

His final composition was to the butler,‭ ‬Flinn, who brought him his last drink. And, in a final fitting salute, his wake lasted four days.

When he died his passing was recalled a famous man of letters of the time:
Saturday,‭ ‬the 25th day of March 1738. Turlough O'Carolan, the wise master and chief musician of the whole of Ireland, died today and was buried in the O'Duignan's church of Kilronan, in the sixty-eighth year of his age. May his soul find mercy, for he was a moral and religious man.
Charles O'Conor