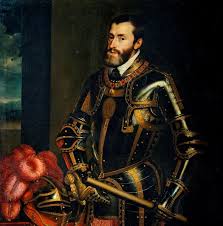 12 September 1528: James FitzGerald, 10th Earl of Desmond wrote to the Holy Roman Emperor Charles V [above] requesting military assistance against the English. The Earl was a very rich and influential Anglo-Irish Magnate whose family were descended from the Anglo-Norman Lords who came over at the time of the attempted Conquest of Ireland in the 12th Century.

The Emperor commissioned his chaplain to visit Ireland. The report of his mission to Dingle, of the resources of the country, of the demeanour of the Earl, and his reasons for hostility. He reported that:


'The Earl himself is from thirty to forty years old, and is rather above the middle height. He keeps better justice throughout his dominions than any other chief in Ireland. Robbers and homicides find no mercy, and are executed out of hand. His people are in high order and discipline. They are armed with short bows and swords. The Earl's guard are in a mail from neck to heel, and carry halberds. He has also a number of horse, some of whom know how to break a lance. They all ride admirably, without saddle or stirrup.'


But in effect Charles V had too many problems of his own to deal with in Germany, Spain & with France and also against the Turks to be able to offer any effective aid to his co religionist in what was to him  a far flung island in the Atlantic Ocean that could not really alter the Balance of Power in Europe.
Posted by Columba Iona at 11:30