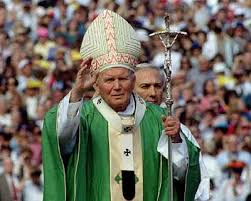 29 September 1979: Pope John Paul II began his visit to Ireland on this day. Ireland was the third pilgrimage of his Pontificate. The Holy Father's first visit was to the Dominican Republic, Mexico and the Bahamas, his second visit was to Poland and his third visit was to Ireland and the United States.


During his 1979 pilgrimage to Ireland, Pope John Paul undertook a hectic schedule travelling the country in order to greet the faithful in the four provinces of Ireland. Over the three days the Holy Father addressed large crowds in Dublin, Drogheda, Clonmacnoise, Galway, Knock, Maynooth and Limerick.


On that first day, September 29th, in the Phoenix Park, he met over one million people, the largest gathering of Irish people in history. He told the people why he felt called to visit Ireland and the Irish. He reminded them how St Patrick heard the “voice of the Irish” and came back to Ireland.


Dear brothers and sisters in Jesus Christ, Like St. Patrick, I too have heard “the voice of the Irish” calling to me, and so I have come to you, to all of you in Ireland. From the very beginning of it’s faith, Ireland has been linked with the Apostolic Sea of Rome. The early records attest that your first bishop, Palladius, was sent to Ireland by Pope Celestine; and that Patrick, who succeeded Paladius, was “confirmed in the faith” by Pope Leo the Great.


Your people have spread this love for the Catholic Church everywhere they went, in every century of your history. This has been done by the earliest monks and the missionaries of Europe’s Dark Ages, by the refugees from persecution, by the exiles and by the missionaries men and women of the last century and this one.


http://www.catholicireland.net
Posted by Columba Iona at 12:29