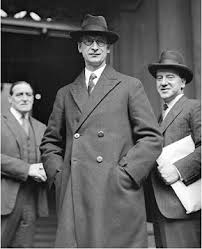 3 September 1939: The Emergency Powers Act was enacted on this day. It gave the government of An Taoiseach Eamon DeValera sweeping and draconian powers to order and control many aspects of daily life in the Irish Free State. It thus gave legislative effect to the State of Emergency that the government had declared the day before after Hitler’s Invasion of Poland and the imminent Declaration of War on Germany by Britain and France. The act had been introduced the day before by De Valera with the following words:


I ask for leave to introduce a Bill entitled “an Act to make provision for securing the public safety and the preservation of the State in time of war, and, in particular, to make provision for the maintenance of public order and for the provision and control of supplies and services essential to the life of the community, and to provide for divers other matters (including the charging of fees on certain licences and other documents) connected with the matters aforesaid.”

The act gave the government the ability to maintain Irish neutrality during The Emergency by providing sweeping new powers to the government for the duration of the emergency, such as internment, censorship of the media and mail by postal censorship, and the government control of the economy.

The State of Emergency was not to be lifted until September 1946 and remained on the Statute Books until 1976!