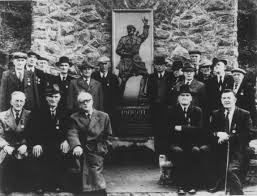 22 September 1920: The Rineen Ambush on this day. The 4th Battalion of the Clare IRA under Commandant O’Neill ambushed a party of Black and Tans and killed six of them without loss to themselves. They then had a lucky escape as quite unexpectedly a large party of British Military arrived on scene by chance but in the confusion all the men of the ambush party successfully got away. Men from the ambush part are pictured above on the anniversary of the encounter in 1957.


On September 22, 1920, one of the most remarkable encounters of the War of Independence took place at Dromin Hill, Rineen. The purpose of the act was to get revenge for the murder of Martin Devitt, an Irish soldier who was shot dead in an ambush in February of that year in the locality. A secondary function was to get arms for the poorly equipped volunteers in the area.


Men from several battalions took part in the ambush. The companies in question were Ennistymon, Lahinch, Inagh, Moy, Glendline, Miltown Malbay and Letterkelly. Most of these, however, were unarmed because of the lack of ammunition. The entire lot of arms consisted of 60 rounds of ammunition, eight rifles, two bombs, two revolvers and 16 shotguns.


All the RIC men in the tender were killed. The RIC men killed were an RIC Sergeant (Michael Hynes), along with five other constables (Reginald Hardman, Michael Harte, John Hodnett, Michael Kelly and John Maguire).


The ambush was carried out by men from the 4th Battalion, Mid-Clare brigade led by Ignatius O’Neill, Battalion O/C and ex-soldier with the Irish Guards, British Army.


Thomas Moroney was in charge of the scouts, one of whom was John Clune, who cycled into Miltown Malbay to check when the tender would return. After the attack on the tender, the IRA had not fully withdrawn when the British military, consisting of about 150 soldiers, arrived on the scene. They were on their way to the site of the capture of RM Lendrum. A running pursuit followed with no deaths on either side but O’Neill and Curtin were wounded.


http://www.clarechampion.ie
Posted by Columba Iona at 12:15