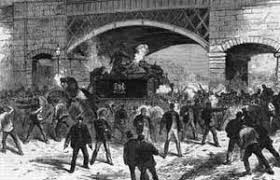 18 September 1867: The rescue of the Fenian Leaders Colonel Thomas Kelly and Captain Timothy Deasy on this day. They were freed from captivity in Manchester, England. Col. Kelly was the head of the revolutionary Irish organisation, the Fenians, at the time. He was arrested with his aide de camp, Timothy Deasy. His identification by an informer led the Manchester Fenians to decide on the prison rescue.


A rescue party of some 30 men secured their release from a closely guarded Police Van. Unfortunately Sergeant Brett of the escort was shot dead when one of the assailants fired a pistol shot through the keyhole of the van to smash the lock. By misfortune Brett had put his eye to the keyhole to ascertain what the commotion was outside. The shot killed him.


As a result three men - Allen, Larkin and O'Brien (The Manchester Martyrs) - were publicly hanged at Salford on 23 November 1867 for taking part in this raid and their alleged complicity in shooting Brett dead. Colonel Thomas Kelly and Captain Timothy Deasy were never recaptured.
Posted by Columba Iona at 11:14